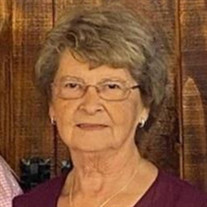 Helen S. Reynolds, 79, of Burke, passed away Saturday, May 7, 2022 at the CVPH Medical Center, Plattsburgh. Born on April 16, 1943, in Burke, NY, she was the daughter of Maynard and Florence (Guerin) Smith. Helen was united in marriage to Gordon F. Reynolds on October 1, 1960. He predeceased her on March 19, 2020. She graduated from Chateaugay Central School in the class of 1960. She worked at Kinney Drugs in Malone as a clerk and book keeper for 55 years before retiring in 2015. She was a member of the Burke Fire Department Ladies Auxiliary for 34 years. She was an avid New York Yankees and UConn Women’s Basketball fan. She treasured spending time with all of her family and watching her grandchildren play sports. She is survived by her three children, John and Anne Reynolds, Shelley and Jamey Skelly, Dale and Betti Jo Reynolds; nine grandchildren, Kyle Reynolds and his fiancé, April Martin, Alicia and Adrian Kulig, Matt and Jenny Skelly, Stephanie Skelly and Gage Gardner, Erin and Alex Mulverhill, Kristyn and Connor McCormack, Katie Albee, Lauren and Justin Patnode; twelve great grandchildren, Gaige and Bentley Reynolds, Carlya Bermudez, Adia, Alina and Aniella Kulig, Elliot Mulverhill, Dayten, Spencer and Owen Albee, Aubrey and Madeline Patnode; three brothers, Vance and Henrietta Smith, Dale Smith and Debbie Harrigan, Bruce and Debbie Smith; four sisters, Linda Ashlaw, Sandra Harmon, Bonnie and Bob Debyah, Doris and Tom Moore; as well as several nieces and nephews. Besides her husband, Helen was predeceased by her parents, her mother and father-in-law, Eric and Beatrice Reynolds; a son, Steven B. Reynolds on July 25, 2018; a brother, Donald Smith; and a sister, LeaAnne Houserman. Calling hours will be held at the Chateaugay Funeral Home on Thursday, May 12, 2022 from 1 p.m. to 3 p.m. A prayer service will immediately follow in the funeral home chapel at 3 p.m. Burial will take place at Ridgeway Cemetery, Burke. Donations in Helen’s memory may be made to Burke Fire Department Ladies Auxiliary.

Helen S. Reynolds, 79, of Burke, passed away Saturday, May 7, 2022 at the CVPH Medical Center, Plattsburgh. Born on April 16, 1943, in Burke, NY, she was the daughter of Maynard and Florence (Guerin) Smith. Helen was united in marriage to Gordon... View Obituary & Service Information

The family of Mrs. Helen S. Reynolds created this Life Tributes page to make it easy to share your memories.

Send flowers to the Reynolds family.