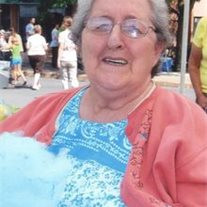 Helen J. Tolosky, 84, of Phillips Court, Lyon Mountain died Wednesday, June 18, 2014 at CVPH Medical Center, Plattsburgh, NY. Born in Lyon Mountain, NY on May 31, 1930, she was the daughter of Oliver Pivetta and Santina (Gigante) Pivetta. She was married to Donald "Pickles" Tolosky on June 20, 1953 in St. Bernard's Church, Lyon Mountain. He predeceased her on Sept. 29, 2010. Mrs. Tolosky graduated from Lyon Mountain High School and the Plattsburgh Business School. She was employed by the U.S. Postal Service and retired as Postmaster of the Lyon Mountain Post Office in Oct. 1992 after 22 years of service. She was a communicant of St. Bernard's Church, Lyon Mountain and a member of Our Lady of the Snows #1548 Catholic Daughters, the Lyon Mountain American Legion Auxiliary and the Citizens of Lyon Mountain. Following her retirement, she started a craft club at her home for over 15 years. She was an avid crotcheter and made many afghans for her family and friends. Being a huge baseball fan, her favorite team was the NY Yankees but her greatest love was following her grandchildren's sporting events. Most of all Helen admired and loved her family so very much she was a wonderful and caring mother, grandmother, aunt and great-grandmother always trying to think of others in her own special way. Whether it be giving a gift, sending a Christmas card, or just trying to stay in touch, it was her nature to be thinking of others all the time. Mrs. Tolosky is survived by four children, Sandra and Charles Kowalowski of Plattsburgh, Michael and Peggy Tolosky of Plattsburgh, Vicki Tolosky of Plattsburgh, Matthew and Margaret Tolosky of Plattsburgh; seven grandchildren; four great-grandchildren; several nieces and nephews. Besides her husband, she was predeceased by her parents; 4 sisters, Regina Pivetta, Sylvia Rolich, Joanne Pivetta, and Celestina "Tina" Glennon; and a granddaughter, Margaret Mary Tolosky. Calling hours will be held at St. Bernard's Church, Lyon Mountain on Sunday, June 22 from 4-6 pm. A Mass of Christian Burial will be celebrated at 11 am on Monday, June 23 in St. Bernard's Church with Rev. Ted Crosby officiating. Burial will take place at St. Bernard's Cemetery, Lyon Mountain. Donations in her memory may be made to the Fitzpatrick Cancer Center or the Christmas Bureau, 2 Veterans Lane, Plattsburgh, NY 12901. The family would like to thank Meadowbrook staff for all the extra loving care and kindness that she received. Thanks to the CVPH ICU and R5 for the special care and attention given to their mom and her family at a difficult time.

The family of Mrs. Helen J. Tolosky created this Life Tributes page to make it easy to share your memories.

Send flowers to the Tolosky family.