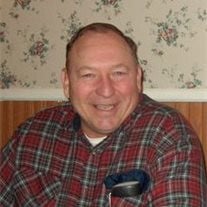 Henry Robert Staib, 63, passed away Saturday August 24, 2013 at home on the farm. Farming was his passion. He was a man of honesty and integrity. His handshake was worth more than a piece of paper. He always kept his word. Born in Tiffin, Ohio on August 12, 1950 he was the son of the late Carl and Edith (Groman) Staib. He graduated from Mohawk High School, Sycamore, OH in 1968. On October 25, 1975 he was united in Christian marriage with Sherri Layne Withers at the Petersburg, OH Presbyterian Church by Reverend Robert Butcher. Their dream was to raise their children on a farm. Henry met Sherri while showing Milking Shorthorns, and he wanted his children to be able to have that experience. He had a lifetime membership of the Ohio Purebred Dairy Cattle Association. He loved to fly and had his pilot's license. He operated the farm at 106 Smith Road for 31 years and built it into what you see today. He lived his dream of having his own grain system and farming alongside his son. He loved being "Papa Henry" and spoiling his grand-daughters. Jordan learned quickly that Papa's lap after supper was the place to find a bowl of ice cream. Jaylyn was fed her first bite of ice cream on Papa's lap. His big arms were always able to soothe the babies and put them to sleep. Henry drove school bus for Chateaugay Central School for 22 years. He was a member and treasurer of the Frontier Lodge #517 Free and Accepted Masons where he was past Master. He served on the Cornell Cooperative Extension Board for many years. He was a member of the Chateaugay United Methodist Church and served as treasurer for many years. He was honorably discharged from the U.S. Army in August 1970. He received his Honorary American FFA Degree in 2001. Along with his wife of 37 years, he is survived by his three children and two daughters-in-love; J Carl and Jamie of Chateaugay, Lori Marie of Massachusetts and Jon Henry and Melissa of Tennessee; and two grand-daughters Jordan Elizabeth and Jaylyn Grace. He also leaves behind two brothers, Harvey Staib (Tiffin, OH), Calvin Staib (New Riegel, OH) and a sister, Carolyn Hare (Hereford, AZ), along with many nieces and nephews. The family will receive friends at the corn barn on the family farm at 106 Smith Rd., Chateaugay on Thursday, Aug. 29 from 6 to 9 pm. A funeral service will be held at the Chateaugay United Methodist Church on Friday, Aug. 30 at 10 am. Frontier Lodge 517 of Free and Accepted Masons will hold their ritualistic service at that time. In lieu of flowers, donations may be made in his memory to Franklin County 4-H and Youth Programming or New York State FFA Foundation Leadership Training for Youth.

Henry Robert Staib, 63, passed away Saturday August 24, 2013 at home on the farm. Farming was his passion. He was a man of honesty and integrity. His handshake was worth more than a piece of paper. He always kept his word. Born in Tiffin, Ohio... View Obituary & Service Information

The family of Mr. Henry Robert Staib created this Life Tributes page to make it easy to share your memories.

Send flowers to the Staib family.