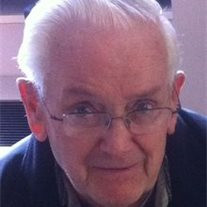 Howard "Curt" Barrett, 83, of the Cook Rd., Burke died Friday, April 18, 2014 at his home surrounded by his loving family and Hospice of the North Country. Born on Sept. 13, 1930 in Malone, NY, he was the son of Howard and Edith Brown Barrett. His first marriage was to Betty LaBarge. His second marriage was to Elaine Wescott whom he married on June 15, 1975. Curt graduated from Franklin Academy with the Class of 1948. He served in the US Army from 1948 to 1952 during the Korean War. Upon his honorable discharge he was employed at Howard Gonyea's garage and later at Alcoa, Massena then transferred to the Reynold's plant. In 1964, he became employed at the St. Lawrence Seaway Project where he was employed for 31 years, retiring as a mechanical maintenance supervisor. He was the former owner of the Tamarac in Duane. Upon it's sale, he purchased the High Falls Inn in Burke which he ran for 20 years. He also built and operated The Village Market in Burke for over 19 years. Curt has been a member of the Burke Volunteer Fire Dept. for 40 years, a communicant of St. George's Church, Burke, a lifetime member of the AMVETS, Malone where he served as post commander for 2 years, the Chateaugay American Legion and the Furnace Mountain Hunting Club. Curt was always active and enjoyed snowmobiling, four-wheeling, camping, the outdoor life and welding. His special enjoyment was spending time with his family and grandchildren. He is survived by is wife, Elaine of 39 years; children, Thomas J. Barrett and his wife, Susan of Beekmantown, Scott Barrett and his wife, Kate of Burke, Michael Barrett and his wife, Donna, Susan Barrett; grandchildren, Tori and Sierra Barrett of Beekmantown, Carson and Maxwell Richards, Edwin and Addison Barrett of Burke; his canine companion, Maggie. He was predeceased by his parents; a brother, Ronald Barrett; a daughter, Cyndi Barrett and son, Joel Barrett. Calling hours will be held at the Chateaugay Funeral Home on Tuesday, April 22 from 5 to 8 pm. A Mass of Christian Burial will be celebrated at 11 am on Wednesday, April 23 in St. George's Church, Burke. Burial will take place at Ridgeway Cemetery, Burke. In lieu of flowers, donations in his memory may be made to the Burke Volunteer Fire and Rescue or the Alice Ballard Hospice Fund.

Howard "Curt" Barrett, 83, of the Cook Rd., Burke died Friday, April 18, 2014 at his home surrounded by his loving family and Hospice of the North Country. Born on Sept. 13, 1930 in Malone, NY, he was the son of Howard and Edith Brown Barrett. His... View Obituary & Service Information

The family of Mr. Howard "Curt" Barrett created this Life Tributes page to make it easy to share your memories.

Send flowers to the Barrett family.