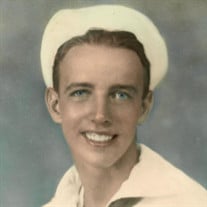 Howard Francis Dibble, 92, formerly of Chateaugay died Sunday, May 14, 2017 at the Alice Hyde Medical Center, Malone, NY. Born on Nov. 16, 1924 in Chateaugay, NY, he was the son of Frank and Stella (Barnes) Dibble. He was married to Violet Collins on March 10, 1945 in the Chateaugay Presbyterian Church. She predeceased him on Oct. 9, 2012. He proudly served his country as a Seaman LC SV-6 in the United States Navy in World War II from 1943 to 1945 on the Destroyer DD581 USS Charrette and was honorably discharged in December of 1945. In his early years, Mr. Dibble was employed by Sheffield Farms and Republic Steel, Lyon Mountain. He then became employed for McCadam Cheese, Chateaugay for 15 years, and then the Village of Chateaugay for nearly 10 years until his retirement in 1983. He was a member of the Chateaugay United Methodist Church. He enjoyed spending time with his family and friends, listening to the radio, reading, watching TV and growing a large vegetable garden. He liked to track the weather, go for walks and do puzzles. He enjoyed puttering around his workshop and spending time outdoors as well as taking care of lawns for his neighbors. He is survived by two sons, Howard Dibble Jr. of Cleveland, OH, Robert Dibble and his wife, Wendy of Chateaugay; a daughter, April Pelkey and her husband, David of Burke; six grandchildren, Jamie Clookey and her husband Jay, Jeanna Bartlett and her husband John, Brian, Daniel, and Michael Dibble, Amy Michael; 12 great-grandchildren, Tristen and Dayrien Dumas, Jayden Clookey, Kaydance, Angel Rose, Alyxzender Clookey, Damien, Lilly Ann and Peyton Michael, Brittannie Zerby, Jace and Cheyenne Dibble, Brian Dibble Jr.; two step-grandchildren, Adam and Joshua Pelkey of Ohio; a sister, Joyce Lockheart of Wampsville, NY; two brothers, Everette Dibble and his wife, Lila of Ogdensburg, William Dibble of Ogdensburg; several nieces and nephews. Besides his wife, he was predeceased by his parents; three brothers, Lawrence, Stanley and Harold Dibble. Calling hours will be held at the Chateaugay Funeral Home on Monday, May 22 from 2 to 4 p.m and 7 to 9 p.m. A funeral service will be held at 11 a.m. on Tuesday, May 23 in the funeral home chapel. Burial will take place at Eastside Cemetery, Chateaugay. Donations in his memory may be made to the Chateaugay Volunteer Fire Dept.

Howard Francis Dibble, 92, formerly of Chateaugay died Sunday, May 14, 2017 at the Alice Hyde Medical Center, Malone, NY. Born on Nov. 16, 1924 in Chateaugay, NY, he was the son of Frank and Stella (Barnes) Dibble. He was married to Violet Collins... View Obituary & Service Information

The family of Mr. Howard Francis Dibble created this Life Tributes page to make it easy to share your memories.

Send flowers to the Dibble family.