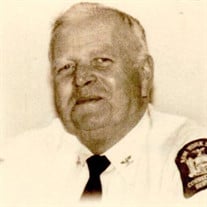 Howard F. Maneely, 86, of Malone, NY passed away on April 16, 2022 at his home, surrounded by family. Born May 21, 1935 to Arthur and Anita (O’Leary) Maneely in Malone, Howard graduated from Franklin Academy in 1954 and soon after began his long, decorated career in law enforcement. He began as a police officer with the Malone Village Police Department in 1957, and then in 1961 began his transition into the realm of correctional facilities. Beginning as a correction officer in Clinton Correctional Facility, he steadily rose in the ranks throughout several different institutions until his retirement in 1996 as the Deputy Superintendent of Security at Franklin Correctional Facility. His retirement didn’t last long, as the next year he was elected Malone’s Town Supervisor. Being elected in the fall of 1997 meant that he was sworn into office during a crucial time in the town’s history – the Ice Storm of 1998. He hit the ground running to ensure the people of Malone had access to adequate resources during that natural disaster and continued to be a champion of the community for the duration of his twenty years in office; retiring with the distinction of the longest serving Supervisor in the history of Malone. In addition to his professional history, Howard served on the Malone Fair Board from 1970 to 2004. During this time he never shied away from service, serving in many officer positions including treasurer, and four terms as president. He took this passion one step further, sitting on the Board of Directors for the New York State Association of Agricultural Fairs (NYSAAF) and was elected president of NYSAAF in 1988. The Association honored him in 2013 with their Hall of Fame Award. Outside of agriculture, Howard was a Lifetime member of the Malone Golf Club and the Malone Lodge of Elks, receiving the Distinguished Citizenship award from the latter in 2017. He was a dedicated member of the Malone Callfiremen for 54 years, serving as Vice President in 1971, and was also a longtime member of the Malone Rotary, named Rotarian of the Year in 2003 and received their Paul Harris fellowship award. He was a Eucharistic Minister for St. Joseph’s Church before it closed, and regularly volunteered delivering Meals on Wheels to the local community. He also served in the National Guard from 1952 to 1961. With such a rich career full of dedication and selfless giving, it was no surprise that those traits spill over into Howard’s family life. He married his sweetheart Patricia in 1958, they had two children, Howard Jeffrey known as Jeff, and Mary Anita. Howard is survived by his wife Patricia, two children Jeff (Linda) Maneely of Malone, NY, Mary (Joseph) Johnson of Malone, NY; five grandchildren, Matthew (Courtney) Johnson of Malone, NY, Mitchell (Kathy) Johnson of Owls Head, NY, Chad Johnson and his partner Tori LaCombe of Malone, NY, Danielle (John) King of Burke, NY, and Ryan (Kayla) Maneely of Moira, NY. He is also survived and lovingly remembered by his seven great-grandchildren. He is also survived by siblings Betty Walsh of Watertown, NY, Alice Tatro of Scotia, NY, Danny (Sheila) Maneely of Malone, NY, Robert (Judy) Maneely of Vermont and Palm Coast, Florida and Michael Maneely of Malone, NY; brothers-in-law, Donald Dumas of Malone, NY and Garth Griffin of Brushton, NY, and numerous nieces and nephews. Howard was predeceased by his parents, siblings James Maneely, Kathleen Dumas and Maryann Griffin, brother-in-law James Walsh and sister-in-law Jody Maneely. Howard will be remembered as a dedicated and passionate leader. He was known to always have a trusty dog by his side, and spent many of his years traveling with his beautiful wife, experiencing many adventures and of course a NY Yankees game or two. The family would like to express their gratitude to the home health aides through MILC who helped in the final years of his life. Your hard work and dedication to his care was so appreciated. Calling hours will be held at Notre Dame Church on Thursday, April 21 from 10 a.m. to 12 p.m. A Mass of Christian burial will immediately follow at 12:05 p.m. at Notre Dame Church. The Mass will be livestreamed on St. Andre Bessette Parish’s Facebook page. Donations may be made in Howard’s memory to the Malone Callfiremen and Hospice of the North Country.

The family of Mr. Howard F. Maneely created this Life Tributes page to make it easy to share your memories.

Send flowers to the Maneely family.