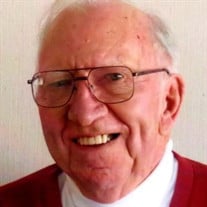 Hugh P. McCann, 90, of East Main St., Chateaugay died Monday, May 17, 2021 peacefully at his home. Born on Aug. 3, 1930 in Chateaugay, NY, he was the son of James and Florence (O’Meara) McCann. He was married to Lucille Leroux on Nov. 29, 1958 in Notre Dame Church, Malone by Rev. Robert Lamitie. She predeceased him on July 6, 2013. His second marriage was to Anita (Decosse) Trombley on May 16, 2015. Hugh attended schools in Chateaugay and graduated from Chateaugay High School with the Class of 1947. In his early years, he ran the family farm on the County Line Road in Chateaugay. In 1962, started a farm machinery business, John Deere Farm Implements and ran that until 1990 when he sold to Giroux Brothers. He then worked as a real estate salesman for Fleury Realty Century 21 and Marshall Realty. He then became employed by Adirondack Furniture in Malone. Hugh was a communicant of St. Patrick’s Church, Chateaugay and a 4th Degree member of the Knights of Columbus where he served as a past Grand Knight and Faithful Navigator. He was also a former Franklin County Legislator, former member of the Chateaugay School Board and a member of the Malone BPOE 1303. He enjoyed spending time with his family and was a great communicator. He enjoyed gardening and was an avid harness horse trainer and racer. He is survived by his loving wife, Anita; his son and daughter-in-law, Thomas and Monique McCann of Whippleville; two granddaughters, Erynne and Ashlyn McCann of Whippleville; five step children, William and Cathy Poupore, Russell and Ronna Trombley, Anne M. Mills, Diane Trombley, Kevin and Melissa Trombley; eight step grandchildren; six step great grandchildren; as well as several nieces and nephews. Besides his first wife, he was predeceased by his parents; three brothers, Daniel, John and Henry McCann; three sisters, Florence Rosman, Catherine Young and Marie Budge. Calling hours will be held at the Chateaugay Funeral Home on Thursday, May 20, 2021 from 3 p.m. to 6 p.m. A Mass of Christian Burial will be celebrated at 10 a.m. on Friday, May 21, 2021 in St. Patrick’s Church, Chateaugay. Burial will take place at St. Patrick’s Cemetery, Chateaugay.

The family of Mr. Hugh P. McCann created this Life Tributes page to make it easy to share your memories.

Send flowers to the McCann family.