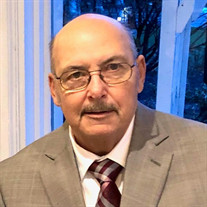 On Tuesday, May 5, 2020, James V. Dumas, loving husband, brother, father and grandfather, passed away at his home in Burke, NY. James was born on May 3, 1945 in Malone, NY, to Vernon C. and Clara (Eldridge) Dumas. He graduated from Franklin Academy in 1963. On June 27, 1964, he was married to Carol (Gokey) at Notre Dame Church in Malone by Monsignor Dumas. Jim began his career working as a metal crafter in Waynesboro, VA. He then worked for Carrier in Syracuse until he started working for Alcoa in February of 1966. He retired from Alcoa in 2000 after 35 years of service. Jim was a member of the Burke Volunteer Fire Department for over 50 years, holding various offices from Fire Chief to President of the Board of Directors. Jim could often be found on the golf course spending quality time with friends. He was an avid hunter and member of Furnace Mountain Hunting Club, where many fond memories were made. He also enjoyed fishing and woodworking in his shop. He was happiest when spending time with his family, including his wife, children, and grandchildren. Jim was famous for his well-timed one-liners, which will be often repeated by the many people who loved him. Preceding Jim in death were his parents, Vernon and Clara (Eldridge) Dumas, and his father and mother-in-law, George and Edna Gokey. He is survived by his loving wife of almost 56 years, Carol; sister and brother-in-law, Carmen and Steve Grondziak of Michigan; a daughter and son-in-law, Michele and Scott MacEachron of Queensbury; a son and daughter-in-law, Craig and Nikki Dumas of Burke, and six loving grandchildren, Alexis Moffit of Texas, Katie and Maddie MacEachron of Queensbury, and Carter, Anna and Kara Dumas of Burke. Due to the circumstances of the COVID 19 virus, there will be no funeral services. A graveside service will be held on Friday, May 8 at 2 p.m. at St. George’s Cemetery, Burke. Donations may be made to the Burke Volunteer Fire Department EMS or to the local American Cancer fund.

On Tuesday, May 5, 2020, James V. Dumas, loving husband, brother, father and grandfather, passed away at his home in Burke, NY. James was born on May 3, 1945 in Malone, NY, to Vernon C. and Clara (Eldridge) Dumas. He graduated from Franklin... View Obituary & Service Information

The family of Mr. James V. Dumas created this Life Tributes page to make it easy to share your memories.

Send flowers to the Dumas family.