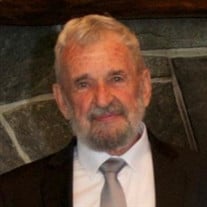 James M. Premo, 86, of Malone, passed unexpectedly Friday, August 7, 2020 at his home. Born on June 2, 1934 in Syracuse, NY, he was the son of Matthew and Margery (Smith) Premo. He was married to Caroline Bell in 1962 and the marriage ended in divorce. Jim enlisted in the US Air Force in November 1953 and was honorably discharged in December of 1954. He was a member of the Civil Air Patrol. He owned and operated Jim Premo Used Cars in Westville for over 60 years before retiring in 2018 as well as driving a school bus for Salmon River Central School for several years. Before opening his used car business, he worked for the Railroad and painted the Castleton Cut Off Bridge in Albany and the Cornwall Bridge and then worked at the St. Lawrence Seaway. He was a member of the Malone Parachute Club where he was a jump master and had his Pilot License. Jim was a Harley Davidson enthusiast and was a member of several motorcycle clubs. He participated in demolition derbies in the Franklin County Fair as well as the New York State Fair. He was a licensed FCC Radio Telephone operator. Jim was a true friend and family man. He enjoyed spending many hours with his family and friends telling stories and providing them a shoulder or hand when they needed it. Jim is survived by his two daughters and sons-in-law, Shirley and Craig Faubert of Malone, Della and Russ Coombe of Malone; four grandchildren, Nicole (David) Gravel, Chantelle Faubert, James Coombe and Kaitlyn (Ian) Gervais; four great-grandchildren, Ethan Faubert, Bailey Gravel, Silas Richards, Caroline Gervais; a sister, Shirley and Jack Swanston of Chateaugay; and a brother-in-law, Howard Blanchard of Florida. Jim was predeceased by his parents; his ex-wife, Caroline Bell; a sister, Eleanor Blanchard; two cousins, Patricia Robert Fleury and Sharon Januska. Services will be private and at the convenience of the family. A Celebration of Jim’s life will be held at a later date. Burial will take place in St. Joseph’s Cemetery, Fort Covington Street, Malone. Donations in Jim’s memory may be made to the Westville Fire Department.

James M. Premo, 86, of Malone, passed unexpectedly Friday, August 7, 2020 at his home. Born on June 2, 1934 in Syracuse, NY, he was the son of Matthew and Margery (Smith) Premo. He was married to Caroline Bell in 1962 and the marriage ended... View Obituary & Service Information

The family of Mr. James M. Premo created this Life Tributes page to make it easy to share your memories.

Send flowers to the Premo family.