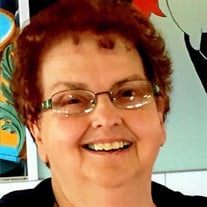 Jeannette Couture, 71, of Lyon Mountain, NY and Ormond Beach, Florida, passed away peacefully with her family by her side on Saturday, January 26, 2019. The daughter of the late Randolph and Lena (Facteau) Wilson, she was born on March 19, 1947 in Plattsburgh, NY. Jeanette worked at CVPH Medical Center in Plattsburg, as an X-Ray Technician/Radiation Therapist for 32 years until her retirement in 2001. Jeanette had a wide circle of friends and a large extended family who meant the world to her. She especially enjoyed watching her grandsons play and fish at their home on Chateaugay Lake. Jeannette is survived by her husband, Earl Couture, whom she married on August 29, 1970 at St. Bernard’s Church in Lyon Mountain, NY. She is also survived by her three sons and their spouses, Jeffery and Serene Couture of Ballston Spa, NY, Jason and Molly Couture of St. Louis, MO, Justin and Nikki Couture of Dannemora; her grandchildren, Alex Couture, Cole Couture, William and Ryan Couture; her sisters, Kathleen Scott of Plattsburgh, Phyliss Coleman of Watertown, Gail Wilson of North Carolina, Carol Buksa of Plattsburgh; sisters and brothers-in-law, Clem and Patty Couture, David and Jan Couture, Linda and Jerry Donah, Mary Lou and Al Moody, Sharon and Ken Recore; several nieces and nephews. Jeannette will be missed by her many friends in New York and Florida. She was predeceased by her parents; mother and father-in-law, Mary and Amos Couture; brothers, Keith Wilson and Russell “Rusty” Wilson; a brother-in-law, Frank Buksa; and a nephew, Steven Wilson. A Mass of Christian Burial will be held at St. Bernard’s Church, Lyon Mountain on June 1, 2019 at 10 a.m. Burial will take place at St. Bernard’s Cemetery, Lyon Mountain. Donations in Jeannette’s memory may be made to Halifax Hospice Care Center, 235 Booth Road, Ormond Beach, Florida, 32174 or the Lyon Mountain Fire Department.

Jeannette Couture, 71, of Lyon Mountain, NY and Ormond Beach, Florida, passed away peacefully with her family by her side on Saturday, January 26, 2019. The daughter of the late Randolph and Lena (Facteau) Wilson, she was born on March 19, 1947... View Obituary & Service Information

The family of Mrs. Jeannette Couture created this Life Tributes page to make it easy to share your memories.

Send flowers to the Couture family.