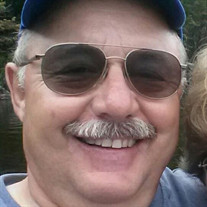 Jerry (Gerald) N. Tourville, 63 of Chateaugay Lake, formerly Ellenburg Center died, Tuesday September 5, 2017. He was born in Plattsburgh on November 4, 1953, the son of Norman and Frances (Trombley) Tourville. Always a farmer at heart is where he began. He worked at Harris Graphics, Murnane Construction and retired from the New York State Department of Corrections in October 2014. He was a loving son, brother, husband, father and grandfather. He was a member of Volunteer ECFD. He was an avid hunter, he loved woodworking, walking in the woods, picking berries and snowshoeing but most of all he loved his family. He loved playing, swimming, boating and ending the day at the bonfire with his grandchildren. He is survived by his wife, Connie (LaBarre) Tourville of Chateaugay Lake, two daughters and son-in-laws, Lisa and Bruce Donnelly of Rensselaer Falls, Melissa and Kevin Friedel of Colton and one son and daughter-in-law, Jeremy and Kara Tourville of Ellenburg Center, two sisters and brothers-in-law, Audrey and Robert Rabideau of Mooers, Pat and Jim Neverett of Northport, and two brothers and sisters-in-law, James and Susan Tourville of Ellenburg Center and Allen and Lori Tourville of Chateugay Lake, mother-in-law Deniege LaBarre of Plattsburgh, three sister-in-laws and two brother-in-laws Sandy LaBarre of Rouses Point, Nancy and Jerry Leary of The Villages, Margaret and Bert Snide of Mooers Forks, eleven grandchildren Casey and Nick Montroy, Miranda and Kristi Donnelly, Christopher and Joshua Hall, Hailey, Eric, Carli and Brady Friedel, Kendall and Brielle Tourville, one great-grandchild Cassius Montroy as well as several nieces and nephews. He was predeceased by his parents, Norman and Frances Tourville, father-in-law Lester LaBarre and brother-in-law H. Gerald LaBarre. Services are private and at the convenience of the family in celebration of his wonderful life. Memorial donations may be made to Chateaugay Rescue Squad and Ellenburg Center Fire Department. “I love you little, I love you big, I love you like a little pig.”

Jerry (Gerald) N. Tourville, 63 of Chateaugay Lake, formerly Ellenburg Center died, Tuesday September 5, 2017. He was born in Plattsburgh on November 4, 1953, the son of Norman and Frances (Trombley) Tourville. Always a farmer at heart is where... View Obituary & Service Information

The family of Mr. Jerry (Gerald) N. Tourville created this Life Tributes page to make it easy to share your memories.

Send flowers to the Tourville family.