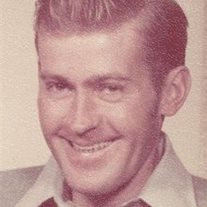 John W. "Jack" Martin Sr. went into his eternal resting place on May 6, 2016. He was under the guidance of hospice and cared for by his loving wife, a registered nurse, Sally with his children by his side. Born on Jan. 19, 1940 in Chateaugay, NY, he was the son of William J. and Frances M. (Darmody) Martin. He is survived by his wife of 49 years, Sally; his children, Ted Martin and wife Tammy of Churubusco, Michael Martin and wife Kerri of Chateaugay, Marcy Peryea and husband Joseph of Altona; nine grandchildren Tyler Martin of Altona, Natasha Carter and husband Fred, Kaedan and Ethan of Brainardsville, Dylan Lamica of Daytona, Florida, Nicole Lamica of Plattsburgh, Jordan, Jaelyn (Winnie) and Walker Martin of Chateaugay and Abigail and Molly Peryea of Altona; sisters Diane Smith and husband Peter of Ridgefield, Connecticut, Patricia Walker and husband Ed of Alton, Virginia, Mary Coache of Ware Massachusetts; brothers Robert Martin and wife Debbie of El Paso, Texas and Gerald Martin of Thorndike, Massachusetts;. and many nieces, nephews, aunts, uncles and cousins. He was predeceased by his son John Martin Jr. "Johnny" in 1982; his mother Frances M. Martin in 1985; father William J. Martin 2000; grandparents Oscar and Alda Martin who inspired him to be a farmer. Jack graduated from Chateaugay Central School in 1959, throughout his childhood he worked on the family farm as well as neighboring farms. He went into the Army Reserves for 6 years as a medic. Jack attended college at the Bridgeport Technical School in Connecticut and worked as a machinist, then tool and dye maker for 10 years. He married Sally Trombley at St. Patrick's church on September 3, 1966. They then went on to own and operate their own dairy farm for 28 years. After retiring, he worked as a transport driver for kidney dialysis patients at Alice Hyde Medical Center for 9 years. He was a communicant of St. Patrick's Church in Chateaugay. He also belonged to the Knights of Columbus and was on the board of the Cooperative Extension for 20 years. Jack's hobbies in included, work, work and more work! He loved all of his animals and working the farm. He had fantastic gardening skills, he especially loved his apple trees, blueberry bushes and flowers. He had quite the green thumb. Jack's grandchildren were the light of his life. He loved to make them laugh and giggle. He was affectionately known to many as "WhoWho". He attended their sporting events and all of their activities. Jack loved to spend time with his family at their many gatherings. He loved riding his John Deere lawn mower and doing his neighbors' lawns. Gabbing was his specialty; he enjoyed talking with everyone, especially the dialysis patients. Calling hours will be held at the Chateaugay Funeral Home on Monday, May 9 from 4 to 8 p.m. A Mass of Christian Burial will be celebrated at 3 p.m. on Tuesday, May 10 at St. Patrick's Church, Chateaugay with Rev. Thomas Kornmeyer officiating. Entombment will take place at Whispering Maples Memorial Gardens, Ellenburg Depot.

John W. "Jack" Martin Sr. went into his eternal resting place on May 6, 2016. He was under the guidance of hospice and cared for by his loving wife, a registered nurse, Sally with his children by his side. Born on Jan. 19, 1940 in Chateaugay,... View Obituary & Service Information

The family of Mr. John W. "Jack" Martin, Sr. created this Life Tributes page to make it easy to share your memories.