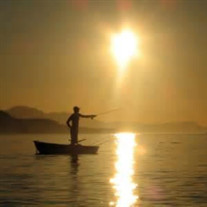 John H. Parmeter – Born in Chateaugay, NY, in 1929, to Wilbur and Lizzie (Coffee) Parmeter, John grew up on the family farm near Earlville (Slab City), NY, he died May 1, 2021, in Lowville, NY. He was a man of few words and a rotten sense of humor. He retired as a Captain of the NYS Police, Troop B, in Malone, having also been stationed in East Greenbush and Bath, NY. Before becoming a Trooper, he served two years in the Military Police, then worked at the Matteawan State Hospital, Wingdale, NY. He and Patricia A. Craig wed in Albany, NY in 1958, and they had one son, John, Jr., an attorney in Watertown, NY. Well, now he’s an attorney, not initially. John was Town of Bellmont Supervisor, as was Pat after him. Hobbies included: trapping, hunting; the NY Mets; and taking care of the house and too much yard. He fished when the conditions were about perfect but gave it up when he started raising brook trout in his home pond in Bellmont Center. He was in two bowling leagues at the Chateaugay Bowling Alley for years, and with a small circle of friends he enjoyed playing cards from 1971 into the 2000’s. He was predeceased by his wife, Pat, in 2007; siblings: Gladys (Ed) Genaway Hart; Leighton (Grace) Parmeter; Eunice (Andrew) Bilow; H. Marie (Stanley) McDonald; and by Pat’s siblings: Arch (Polly) Craig; Harold (Drucille) Craig; niece, Lynn Herb; and nephew, David Bilow. He is survived by son, John, Jr. and his wife, Julie; Pat’s sister, Jane Watrous and her husband Ivan; and 19 nieces and nephews. Instead of flowers or donations, do as John would recommend: save as much of your money as possible. There will be no calling hours due to COVID-19 concerns. A graveside service will be held at 1:30 p.m. on Saturday, June 26 at Eastside Cemetery, Chateaugay.

The family of Mr. John H. Parmeter created this Life Tributes page to make it easy to share your memories.

Send flowers to the Parmeter family.