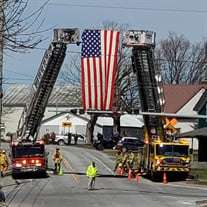 It is with heavy hearts that the family announces the unexpected passing of Jonathan M. Damon of Brainardsville, NY. He was born August 20, 1981 in Saratoga Springs and taken far too soon on April 23, 2020. Jonathan “Thunder” Damon grew up and was homeschooled on the family farm, where his lifelong love of tractors and anything mechanical began. Jonathan loved to work with his hands and on anything with an engine. He later went on to become certified in small engine repair. Jonathan joined Moira Fire Department at the age of eighteen, where he truly found his calling. In 2000, he became an EMT. When the cows were sold, he then went to work for Northern Ambulance in Malone, NY. It wasn’t long before Jonathan was looking to expand his skill set as an EMT and obtained his AEMT-CC certification in 2010. Most recently he completed the pre-requisites for paramedic school and was one test away from achieving one of his life goals. Jonathan was a very passionate man, especially when it came to the fire department and EMS agencies that he worked for. In his many years of service, he worked for Saranac Lake Rescue Squad, Malone EMS, Tupper Lake EMS, as well as being a volunteer fireman for Brushton and most recently Chateaugay FD. Jonathan had a smile that could make anyone’s day brighter as well as the kindness to back it up. He LOVED people and had an exuberant personality. He could make a friend anywhere he went. He cared for people and would lend a helping hand any time he could. When Jon loved something, he loved deeply and with every fiber of his being. You couldn’t ask for a better fiancé, father, son, brother, friend, firefighter, or EMT. His memory will forever be cherished and his love will be carried on in the hearts of the many lives he has touched. He found the love of his life in Lindsey Legacy and was looking forward to their September wedding. He will be deeply missed by Lindsey and the family they created. He leaves behind his sons Gabriel, Jenson, Wyatt Andrew and his daughter Kaylene along with Lindsey’s boys Wyatt Daniel and Simon who he considered as his own. He will be remembered by his grandfather, Pastor Howard “Gene” Thomas, of Saranac, his mother, Margene Damon of Brushton, father Steve Damon of St Regis Falls, his sister Stephanie and her husband Neil Fish of Mountain View and brother David of St Regis Falls. As well as nephews and niece, Chester, Lili, Andy Damon and Ernest Fish. He will be missed by confidante and co-conspirator Michael Barse, his lifelong friend whom he considered a brother. He will also forever be in the hearts of all the people who he worked and served with as a volunteer and EMT. Jonathan lost his mentor, Uncle “Tom” Thomas, at a young age. He was also predeceased by his grandparents, Roland and Shirley Damon, Marian Thomas, and uncle Warren Clarke. A private memorial service will be held for family and close friends. A full public funeral will be planned at a later date when we are allowed to gather in crowds again. Donations in his memory can be made to the fire department or EMS agency of your choice.

It is with heavy hearts that the family announces the unexpected passing of Jonathan M. Damon of Brainardsville, NY. He was born August 20, 1981 in Saratoga Springs and taken far too soon on April 23, 2020. Jonathan &#8220;Thunder&#8221; Damon... View Obituary & Service Information

The family of Mr. Jonathan M. Damon created this Life Tributes page to make it easy to share your memories.

It is with heavy hearts that the family announces the unexpected...

Send flowers to the Damon family.