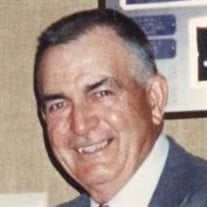 Joseph G. Ducharme, 86, of Third St., Lyon Mountain died Monday, April 11, 2016 at CVPH Medical Center, Plattsburgh, NY. Born in Lyon Mountain, NY on December 19, 1929, he was the son of Ray and Jennie (Ryan) Ducharme. He was married to Joan Lezak Huggins on June 27, 1997 in Porters Corners NY. After graduating from Lyon Mountain High School, Mr. Ducharme became employed at Republic Steel at a cindering plant and then the mines in Lyon Mountain. He enlisted in the U.S. Marine Corp in 1952 and was honorably discharged in 1954. In 1955, he became employed for the NYS Department of Environmental Conservation serving as a forest ranger in the Lyon Mountain area for 36 years, retiring in 1991. From 1980 to 2008, he was a self employed logger. He loved logging and used to say "once you get sawdust in your blood you can't get rid of it." Joe was active and instrumental in forming the Forest Rangers Color Guard for the state of New York and was a charter member of the Lyon Mountain Fire Department, serving as chief for 12 years. He was a communicant of St. Bernard's Church, Lyon Mountain, former member of Hunters Home Hunting Club and member of the Lyon Mountain American Legion for over 35 years, serving as member of the firing squad and past commander. Joe was an active first aid instructor for the Clinton County and taught many classes to fire departments and community organizations. He was instrumental in organizing the Lyon Mountain Mining and Railroad Museum, serving as a member of their board. Over the years, Joe enjoyed the outdoors, trapping, hunting, fishing, planting flowers and tending to his many blueberry bushes. He especially enjoyed working in his gardens as it gave him great pleasure to give away his abundance of vegetables to many people. He had a very caring and giving heart. He was loved by many people. During the last 7 ½ years, after his logging accident, he enjoyed getting outside in his wheelchair and going for walks. He also enjoyed watching his favorite old time westerns and sitting at the table watching the birds and other animals eating the food that was put out for them. He also enjoyed the visits from the few people who came to see him. It made him happy when he was read to from his Country and Reminisce magazines and enjoyed the pictures and memories it brought back to him. Joe is survived by his wife of 19 years; a daughter and son-in-law, Carla and Robert Matthews of Dannemora; a step-son, Thomas Huggins Jr. of Lyon Mountain; a grandson, Logan Matthews; a sister, Theresa Wilson of Lyon Mountain and her son, James Wilson; many nieces, nephews and cousins He was predeceased by his parents; brothers and their wives, Roger and Lillian Ducharme, Kenneth and Marie Ducharme, Bernard and Lorraine Ducharme; sisters, Antoinette and Eva Ducharme, Mildred Petrashune; brothers-in-law, Keith Wilson and John Petrashune. At Joe's request, there will be no services. Donations in his memory may be made to a veteran's organization of one's choice, Lyon Mountain EMS or the Lyon Mountain American Legion.

The family of Joseph Ducharme created this Life Tributes page to make it easy to share your memories.

Send flowers to the Ducharme family.