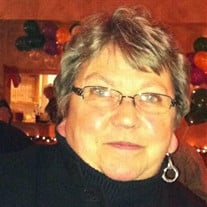 Kathleen Dumas, came in to this world on May 2, 1944, born to Arthur and Anita Maneely. Kathleen was born and raised in Malone, and on March 4, 1967, she married Donald N. Dumas, the love of her life. After their marriage, they moved for a short time to Utica, NY, only to find it in their hearts to come back to make their home in Malone, NY. Kathleen was blessed with six children whom she loved and cared for till her last days, even though all six tried their best to drive her insane. Kathleen is survived by her loving spouse, Donald N. Dumas; her son, Peter A. Dumas, of Malone, NY, and his wife Deanna Dumas, and their four children, Samuel, Simon, Elizabeth and Sebastien; her daughter Paula McNerney of Woodstock, CT, and her husband Shawn McNerney, and their two children Francis and Brigid; her daughter, Andrea Dumas of Malone, NY, and her significant other Wally Wright, as well as Andrea’s daughter Morgan Dumas, and Wally’s sons Willam and Zachary Wright; her Daughter Angela Coley, of Greensboro, NC, and her husband Christopher Coley, and their twin daughters London and Kennedy; her son Matthew Dumas, of Malone, NY, and his wife Jean Dumas, and children Olivia, Hunter and Myrra; her daughter Stephanie Poirier, of Saratoga Springs, NY, and her husband Jeremy Poirier, and their children Emma, Christian, and Charlotte. The amount of love that Kathleen gave to her vast family, can only be compared to the amount of love that we have for her, and always will. Kathleen was one of nine Maneely children. She was pre-deceased by her brother James “Jimmy” Maneely, of Ogdensburg, NY; her sister Marianne Griffin, of Brushton, NY; her brother-in-law James Walsh, of Watertown, NY (husband of Elizabeth Walsh); and her sister-in-law Jody Maneely (wife of Michael Maneely). She is survived by her sister Elizabeth “Betty” Walsh of Watertown, NY; her brother Howard Maneely and his wife Pat, of Malone NY; her sister Alice Tatro of Scotia, NY; her brother-in-law Garth Griffin of Brushton, NY, (husband of the late Marianne Griffin); her brother Daniel “Danny” Maneely and his wife Shelia, of Malone, NY; her brother Robert “Bobby” Maneely and his wife Judy, of Colchester, VT; and her brother Michael “Mikey-Joe” Maneely, of Malone, NY. Kathleen also married into a family of nine children, and loved them as if they were her own siblings. There will be no calling hours. There will be a funeral mass at Noon, on Thursday, December 27, 2018, at Notre Dame Church in Malone, NY. Please do not send flowers, the fields of Sandy Meadows Farm bloom with flowers for her every year. Instead, please make a donation in her memory to Hospice of the North Country or the Malone Callfiremen & EMS for all the loving care that they gave her. Kathleen was the sun that made our days bright and full of love and laughter, and the moon that lit our nights, keeping us safe and secure. She was and is our everything.

Kathleen Dumas, came in to this world on May 2, 1944, born to Arthur and Anita Maneely. Kathleen was born and raised in Malone, and on March 4, 1967, she married Donald N. Dumas, the love of her life. After their marriage, they moved for a short... View Obituary & Service Information

The family of Mrs. Kathleen Dumas created this Life Tributes page to make it easy to share your memories.

Send flowers to the Dumas family.