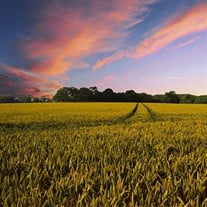 Lawrence F. Spinner, 100 years old, passed away peacefully Friday, October 5, 2018 at Elderwood of Uihlein Mercy Center in Lake Placid, N.Y. He was born at home in Burke, NY April 14, 1918 to Henry and Mabel (Demers) Spinner. They predeceased him. He is survived by his four sons, Frederick (Christine), James (Brenda), Arthur (Ellen), Leonard (Patricia) and his four daughters, Theresa Bell, Doris Grunert, Dorothy (Brent) Richards and Christine Elsbree. Also surviving are several grandchildren, great grandchildren, nieces, nephews and cousins. He was predeceased by his loving wife, Edith, who passed away March 17, 2004. He was also predeceased by a brother, Earl and a sister, Mary Jane Nichols. Lawrence was a successful dairy farmer his whole life. In retirement, he and his precious wife travelled by motor home to Florida for 25 winters, enjoying leisure time there with their many friends. He served as a Trustee for the Number 9 School District in Burke, NY for many years until it was dissolved. He shared his love and knowledge of farming as a beloved 4-H leader for many years. He was proud to be an active member of Notre Dame Parish, and served as a Knight of Columbus for over 50 years. He volunteered at the Malone Adult Center, delivering Meals on Wheels for many years. He and his wife cared for many foster children while they raised their own family. Calling hours will be held at St. Mary Murphy Wilcox Funeral Home in Malone, NY on Monday, October 8, 2018 from 2 to 4 p.m. A Mass of Christian burial will be celebrated on Tuesday, October 9 at 10 a.m. at Notre Dame Church. Following burial at Notre Dame Cemetery on Andrus St. in Malone, a reception to celebrate his life will be held at the Knights of Columbus Hall on Elm St., Malone. In lieu of flowers, the family requests donations be made to his great-granddaughter, Cassidy Spinner, in her brave battle against cancer. Donations may be mailed to: Mr. and Mrs. James Spinner, Jr., 431 Rider Road, Malone, NY 12953.

The family of Mr. Lawrence F. Spinner created this Life Tributes page to make it easy to share your memories.

Send flowers to the Spinner family.