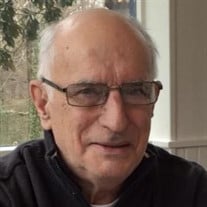 Leo Oliver Boyea, 79, of Harrison Ave, Chateaugay passed away Saturday, November 14, 2020 at his home with his loving family by his side and aided by Hospice of the North Country. Born on September 8, 1941 in Chateaugay, NY, he was the son of Henry Oliver and Lavina Mae (Patenaude) Boyea. He was married to Irma Lorraine Hobbs on August 26, 1961 in St. Patrick’s Church, Chateaugay by Monsignor Joseph F. Luker. Leo graduated from Chateaugay Central School in 1960. He followed in his father’s footsteps and was a master mechanic and member of Operating Engineers Local 106 for almost 30 years. After this retirement, he continued work as a mechanic for NYSDOT and DOC prior to his final retirement. Leo pursued life with great passion. His loves, in addition to his beloved family, included a life-long love of cars, NASCAR racing and Dale Earnhardt, cajoling and imbibing with friends and “foes”, tinkering with everything, gardening and growing giant pumpkins, bowling, and his signature passion was forever being available to help anyone in need. As many well know, Leo was a man who wore many hats over the years and was a jack of many trades; a business owner, Assistant Fire Chief, Village Board member, and Knights of Columbus member. He was an active member of the Chateaugay Fire & Rescue Department for 20 years. Leo was also a communicant of St. Patrick’s Church. Leo is survived by his wife of 59 years, Irma; a son, Bryan Boyea and his wife, Jill of El Paso, TX; two daughters, Michelle Carr and her husband, Dennis of Fredericksburg, VA, Stacie Pezzullo and her husband, John of Hopewell Junction, NY; two brothers, John (Jack) Boyea and his wife, Peg, Ronald Boyea and his wife, Helen all of Chateaugay; three sisters, Joyce Boyea, Helen Ryan and her husband, Gerald, Betty Cook and her husband, Thomas all of Chateaugay; six grandchildren, Rebecca and Adam Boyea, Travis Carr, Lindsay (Carr) Platt and her husband, Nick, Derek and Abigail Pezzullo; as well as many nieces and nephews. He was predeceased by his parents; maternal grandparents, Basil and Florence Patenaude; paternal grandparents, Oliver and Anna Boyea; and a brother, William (Bill) Boyea. A Mass of Christian Burial will be celebrated at St. Patrick’s Church, Chateaugay on Thursday, November 19, 2020 at 1 p.m. The family will be greeting people as they arrive. In accordance with current health restrictions, those in attendance are asked to observe the use of face coverings and social distancing. A livestream of the Mass can be viewed at https://www.facebook.com/Deac2009/. Donations in Leo’s memory may be made to Disabled American Veterans, Alzheimer’s Association - Northeastern New York Chapter or a charity of your choice.

Leo Oliver Boyea, 79, of Harrison Ave, Chateaugay passed away Saturday, November 14, 2020 at his home with his loving family by his side and aided by Hospice of the North Country. Born on September 8, 1941 in Chateaugay, NY, he was the son of... View Obituary & Service Information

The family of Mr. Leo O. Boyea created this Life Tributes page to make it easy to share your memories.

Send flowers to the Boyea family.