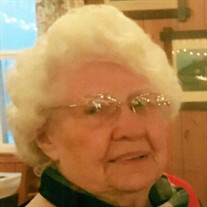 Leta M. Lobdell, 82, of Chateaugay, died Saturday, August 11, 2018 at her home surrounded by her family and Hospice of the North Country. Born on June 7, 1936 in Chateaugay, NY, she was the daughter of Leo and Irene (Bush) Murray. Leta was married to Kenneth Lobdell on May 28, 1955 in Chateaugay by Rev. Kenneth Jones. He predeceased her on July 13, 2011. She graduated from Chateaugay High School in 1954. She worked as a teacher’s assistant at BOCES in Malone, NY at Salmon River Central School for 15 years before retiring. She was a member of the Chateaugay Democrat Committee and a Franklin County Election Inspector for over 34 years. She was a member of the North Burke Church, Burke Adult Center and served on the board. Leta enjoyed being a caretaker and guardian of the North Burke Rural Cemetery. She enjoyed her family and loved the time she spent with them. She loved cooking, especially Molasses cookies, donuts and applesauce. She also enjoyed going hunting and was an avid reader. She is survived by her five children and their spouses, Orlin Lobdell and his companion, Angela Toohill of Chateaugay, Cindy and Bob Duquette of Peru, Janice and Jerry Blow of Chateaugay, Raye and Lori Lobdell of Altona, Cheryl and Joe Siskavich of Chateaugay; 11 grandchildren; 14 great-grandchildren; brothers and sisters, Owen and Myrtle Murray of Altmont, Dr. Garth Murray of Bath, NY, Julia Casey of Ft. Edwards, Nina and Dee Morgan of Chateaugay, Glenn and Linda Murray of Cheyenne, Wyoming, Kris Murray Mack of Williamsonville; 3 step-sisters-in-law, Vonda McKinstry of Florida, Sandy LaBarre of Rouses Point, Rita and Arnie Adam of Cortland; as well as many nieces and nephews. Besides her husband, she was predeceased by her parents, a son, Alan C. Lobdell, a sister, Donna Murray and a brother, M. Craig Murray. Calling hours will be held at the Chateaugay Funeral Home on Thursday, Aug. 16 from 4 p.m. to 7 p.m. A memorial service will be held at the North Burke Church on Friday, Aug. 17 at 10 a.m. Burial will take place at the North Burke Rural Cemetery, Burke. Donations in her memory may be made to the Chateaugay Fire Department, Hospice of the North Country or North Burke Rural Cemetery.

Leta M. Lobdell, 82, of Chateaugay, died Saturday, August 11, 2018 at her home surrounded by her family and Hospice of the North Country. Born on June 7, 1936 in Chateaugay, NY, she was the daughter of Leo and Irene (Bush) Murray. Leta was married... View Obituary & Service Information

The family of Mrs. Leta M. Lobdell created this Life Tributes page to make it easy to share your memories.

Send flowers to the Lobdell family.