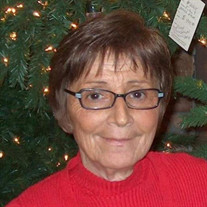 Linda I. Pickering, “Gram”, 70, of Burke passed away Thursday, June 17, 2021 peacefully in her home surrounded by family. Born on Aug. 4, 1950 in Malone, NY, she was the daughter of John and Beatrice (Vaincourt) Soucia. She was married to Wesley “Wes” Pickering on March 24, 1979 in Moira. He predeceased her on Oct. 31, 2016. Linda attended Chateaugay Central School. She received an associate’s degree from North Country Community College and a bachelor’s degree from Plattsburgh State University. She was employed by New York State Corrections as a substance abuse counselor. Linda had a passion for family like no other and was known as Gram by many. She is survived by four children, Robin Merrill and his companion, Lynn Dailey, John Merrill, Charlene Brady and her husband, Scott, Marvin Merrill and his wife, Christine; seven grandchildren, Justin Corcoran, Cecilia Merrill and her companion, Chad Covey, Jacob Merrill, Bryant Merrill and his companion, Felicia Farrell, Kayleigh Merrill, Wyatt Merrill, Brooke Merrill; five great-grandchildren, Pal Covey, Taylor Corcoran, Fyn Covey, Blossom Covey, Felix Farrell; two sisters and brothers-in-law, Sally and Herbie Barton, Poppy and Pete Gagung. Besides her husband, she was predeceased by her parents, two brothers, David and Donald Soucia. Calling hours will be held at the Chateaugay Funeral Home on Saturday, June 26 from 9 to 10:45 a.m. A Mass of Christian Burial will follow at 11:00 a.m. at St. Patrick’s Church, Chateaugay. Burial will take place at St. Francis Cemetery, Constable. Donations in her memory may be made to Burke Fire Dept.

The family of Mrs. Linda I. Pickering created this Life Tributes page to make it easy to share your memories.

Send flowers to the Pickering family.