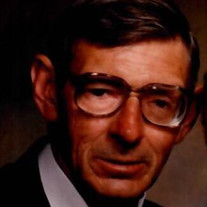 Lloyd N. Boadway, 86, of the Number 5 Road, Chateaugay died Thursday, June 7, 2018 at his home surrounded by his loving family and aided by Hospice of the North Country. Born in Ellenburg, NY on Feb. 29, 1932, he was the son of Thomas and Armeda (LaBombard) Boadway. He was married to Clarinda Hebert on Sept. 15, 1956 in Immaculate Heart of Mary Church, Churubusco by Rev. Richardson. She predeceased him on July 21, 2017. Mr. Boadway graduated from Northern Adirondack Central School. In his early years, he was a truck driver and employed at State Hospital in Rochester. He then owned and operated the family farm from 1954 to 2004. He was a communicant of Immaculate Heart of Mary Church, Churubusco and Third Degree member of the Knights of Columbus #401 in Ellenburg. He enjoyed listening to country music and played in a country music band. He also enjoyed riding his 4-wheeler for his farm and loved spending time with his grandchildren. Mr. Boadway is survived by 5 children, Donald Boadway of Chateaugay, Darrell Boadway and his wife, Kim of Pendleton, KY, Gary Boadway and his companion, Kathy McKenna of Chateaugay, Kevin Boadway and his companion, Joann Rogers of Bloomfield, NY, Lisa Ewing and her husband, Mark of Mount Morris, NY; 6 grandchildren; 5 great-grandchildren; 3 brothers and sisters-in-law, Frank and Carol Boadway of Chateaugay, Richard and Lynn Boadway of Chateaugay, Aldon Boadway of Hudson, MA; 4 sisters and 2 brothers-in-law, Joyce Hough of Mooers, Eleanor and Charles Clynes of Maryland, Monica Tarrant of Houston, TX, Sharon and Malcolm Jones of Malone; a sister-in-law, Marjorie Boadway of Chateaugay and several nieces and nephews. Besides his wife, he was predeceased by his parents; a brother, Walter Boadway; two sisters, Patricia DuBrey and Della Charette; three brothers-in-law, Morris Charette, Robert Hough and Jerry Tarrant; three nephews, Leonard Charette, Art Charette and Tim Boadway; two nieces, Glenda Boadway Fults and Roseanne Charette Clark There are no calling hours. A Mass of Christian Burial will be celebrated at 11 a.m. on Thursday, June 14 in St. Edmund's Church, Ellenburg with Rev. Todd Thibault officiating. Burial will take place at Immaculate Heart Cemetery, Churubusco. Donations in his memory may be made to the Alzheimer’s Association, Ellenburg Fire Department or Hospice of the North Country.

Lloyd N. Boadway, 86, of the Number 5 Road, Chateaugay died Thursday, June 7, 2018 at his home surrounded by his loving family and aided by Hospice of the North Country. Born in Ellenburg, NY on Feb. 29, 1932, he was the son of Thomas and Armeda... View Obituary & Service Information

The family of Mr. Lloyd N. Boadway created this Life Tributes page to make it easy to share your memories.

Send flowers to the Boadway family.