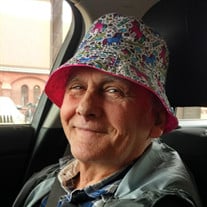 A kind and gentle soul ascended into eternal life on April 20,2020. Louis N. Miner was born in Tupper Lake on July 23, 1945 to Louis and Flora LaBrie Miner. He moved to Malone many years ago, but prior to that he worked on area farms and garages. In 1982 he began his employment with Citizen Advocates, performing a number of jobs, including laundry service and working in the work center as a sander. He was especially proud of being a part of the production of Adirondack Chairs "that no one would get a splinter from sitting on". By choice, he woke up one morning in 2018 and proclaimed he was retired and ready for his "pension". Louie lived life to the fullest. He enjoyed walking and shopping and was a frequent patron of the Dollar Tree, Kinney Drugs and Walgreens. He also enjoyed gardening, fishing, long car rides to look for wildlife, going to the casino, dining out, train rides, picnics, cracking jokes, orange knit hats, coin purses, sweet corn and chocolate ice cream. In his younger years he enjoyed camping and the comradrie of others around a camp fire. When he was at home, he liked watching the news, eating venison supplied by his many hunting friends, visiting with the maintenance men, and caring for the homeless cats in his neighborhood. Louie also enjoyed his time with Randy and others, going to and from work, listening to music and conversing about current events. Louie cherished his time with his family. He loved going with his niece to visit his brother and "going home" to family gatherings. Louie is survived by his brother, Leon Francis Miner (Jean)of Ogdensburg, his niece Michelle (Zach) White of Chasm Falls, and nephew Craig (Lynn) Livernois of Malone, Marilyn Lawrence and Dee Livernois. He is survived by great nephews Lucien White, Chandler Livernois, Ryan Livernois and Great Niece Kayla Livernois He is also survived by his "adopted Grandmother" Fran White and a large extended family including "his Valerie" and her family, Stickey, Diane "Charles" , special friends Jody and Tootie, and far too many to list from the staff of Elm Street Residence, Willard Street IRA and other departments of Citizen Advocates that will miss him deeply.' Louie was predeceased by his parents, his beloved sister Mary and her husband Robert Livernois, his nephew Dean Livernois, his "adopted grampa" Fred White and his "buddies" Mark Carter and Larry Perrin. Louie was a genuine person, honest and forthright. He had a knack for sensing the true character and sincerity of others, so if he gave you his time, it was the ultimate compliment. He kept his promises and valued his relationships. He took pride in earning what he had but loved finding a coin or dollar on the ground during his walks, referring to himself as "Lucky Louie". In the fast paced world in which we live, Louie took his time, observed everything, took nothing for granted and valued everything: large and small. With an infectious smile and a twinkle in his eye he embarked on each new day, often with the statement that "you can't take it with you" so enjoy it while you have it. He was very wise indeed. In accordance with the current health restrictions, attendance-controlled calling hours will be held at St. Mary-Murphy-Wilcox Funeral Home on Thursday, July 23 from 2:30 p.m. to 4 p.m. A prayer service will immediately follow at 4 p.m. in the funeral home chapel. Those in attendance are asked to observe social distancing and use of facial coverings. Burial will be held in Brainardsville Cemetery, Brainardsville. In lieu of flowers, donations in his memory may be made to the American Heart Association, the American Cancer Society or the St. Lawrence Valley SPCA.

A kind and gentle soul ascended into eternal life on April 20,2020. Louis N. Miner was born in Tupper Lake on July 23, 1945 to Louis and Flora LaBrie Miner. He moved to Malone many years ago, but prior to that he worked on area farms and garages.... View Obituary & Service Information

The family of Mr. Louis N. Miner created this Life Tributes page to make it easy to share your memories.

Send flowers to the Miner family.