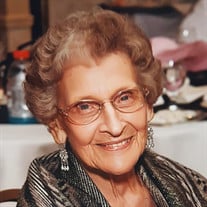 Luva A. Patnode Bova Bourcier, beloved and cherished mother, grand-mother and great-grand-mother, age 97, of Fort Covington St., Malone, NY, died May 9, 2020 peacefully at her home surrounded by her children. She was born in Churubusco, NY, April 3, 1923, and was the daughter of Maxim and Rose (Dupuis) Patnode. Luva was married to Gerald D. Bova on October 19, 1946, at St. Philomena/Immaculate Heart of Mary Church, Churubusco, NY. Gerald predeceased her on March 26, 1984. Her second marriage was to Richard Bourcier on September 6, 1986 at St George’s Church, Burke, NY, and he predeceased her on January 9, 2011. Lou graduated from Chateaugay Central High School, Chateaugay, NY in the class of 1940. She was employed at J.J. Newbury’s Store in Malone, NY. In 1942 at the start of World War II, she and many of her friends left Malone to find employment in the defense plants in Buffalo, NY. While there, she joined the United States Cadet Nurse Corps Program offered through the Edward J. Meyers Memorial Hospital School of Nursing. At the end of the war, after the defense plants closed, she returned home, thus beginning her life-long “career” of service to others. For many years, she and her husband Gerald, owned and operated the Country Inn Restaurant in Burke Center, NY, which was well-known for Lou’s many delicious home-cooked meals and desserts, and a common community gathering place. The Country Inn sponsored a popular softball team known as, “The Country Inn Bears”, which offered evening games. The new construction of Route 11 was the cause for the restaurant closure. Luva was a communicant of St Joseph’s Church in Malone, NY, a member of the Altar & Rosary Society, a Pastoral Outreach Service, a Eucharistic Minister, a Religious Education Teacher, and a Hospice Volunteer. For many years, she was a RSVP Volunteer at Franklin County Mansion Nursing Home spending many hours visiting the patients and their families, and very much enjoyed doing this work. She was well-known for her kind and loving nature and the goodness she saw in everyone. Luva especially loved spending time with her children and grandchildren, playing a very active role in the lives of her children’s families, including several grandchildren and great- grandchildren. Even as her family continued to grow, and as her grandchildren traveled farther and wider, married, with children of their own, she managed to keep track and follow their travels, not resting until she knew they had returned home safely. This was no easy task with so many grandchildren. Luva loved to write letters, leaving her grandchildren with many positive and worthwhile ideas and suggestions for solving life’s many problems in a sweet and loving manner, which came to be known as “Luva’s Rules to Live By!” Lou is survived by seven children and their spouses: Connie Wells of Plattsburgh, NY; Charlotte (and John) Barewicz of Burlington, VT; David (and Roxanne) Bova of Plattsburgh, NY; Joan (and Robert) Johnston of Burke, NY; Bonnie Tracy of Canton, NY; Karen (and David) Johnston of Burke, NY; Freddy (and Lori Murphy) Bova of Fair Haven, VT. Two stepchildren: Bradley Bourcier of Malone, NY and Tamara (and Charlie) Webb of Royersford, PA. Twenty-seven grandchildren and many great-grandchildren. One sister Leila Wood of St Louis, MO; a sister-in-law Theresa Bova Patnode of Malone, NY and several nieces and nephews. She was predeceased by her parents, two sisters: Beulah LaDuke and Marie Bova, four brothers: Floyd Patnode, Gerald Patnode, Donald Patnode, Lawrence Patnode and a son-in-law Donald Tracy. Due to COVID-19 a Mass of Christian Burial will be held privately for the immediate family, and the burial will take place in St. Patrick’s Cemetery, Chateaugay, NY. Donations in her memory may be made to: Hospice of the North Country, or Office of the Aging, Malone, NY.

Luva A. Patnode Bova Bourcier, beloved and cherished mother, grand-mother and great-grand-mother, age 97, of Fort Covington St., Malone, NY, died May 9, 2020 peacefully at her home surrounded by her children. She was born in Churubusco, NY,... View Obituary & Service Information

The family of Mrs. Luva A. Patnode Bova Bourcier created this Life Tributes page to make it easy to share your memories.

Send flowers to the Bourcier family.