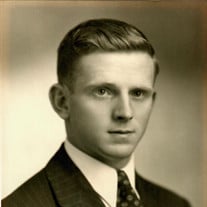 Mert “Clark” Mitchell, 91, of Burke, died Friday, December 16, 2016 at the Alice Center. He was born at his homestead of Burke, on September 13, 1925, the son of the late Warren and Rachael Jones Mitchell. He graduated from Chateaugay High School. Mr. Mitchell was a farmer for over 40 years; he worked over 40 years at the Burke Post Office as a mail carrier; and after his retirement worked for another 10 years at the Malone Golf and Country Club in Malone and finally retired at the age of 80 In his earlier years, he played baseball for the Burke Bears. He was a member of the Burke and Chateaugay United Methodist Churches. Mr. Mitchell was a member of the Burke Volunteer Fire Department for more than 50 years; was a member of the Chateaugay Masonic Lodge Free and Accepted Masons; was a past member of the Franklin County Extension Service, the Burke Town Board for 8 years, the Burke Grange, the Malone Elks Club and a bowling league in Malone and Chateaugay. He enjoyed doing word puzzles, reading, and playing golf and was an avid Yankees fan. On June 2, 1961 he married Shirley Perry Fish at the Burke United Methodist Church. They later separated. She survives and lives in Malone. Surviving are two daughters, Deborah Mitchell of Keene and BetsyMitchell-Oddey of Burke; four stepdaughters and their spouses, Mary Lou and Ken Vondell of Malone, Trudy and Philip Ross of Brushton, Joelle and Rolland Poirier and Holly and Eugene Poirier, all of North Bangor; a grandson, Nicholas Oddey of Burke who held a special place in his heart; 24 step grandchildren; many step-great-grandchildren; two nephews he admired, Warren Legacy and his companion, Roxy Gaetano of Malone, and David Legacy of Burke; and several cousins and nephews. Besides his parents, he is predeceased by a stepson, Bernard “Buddy” Mitchell on April 7, 1989; and two sisters and brothers-in-law, Ruth and Elmer Legacy, and June and Earl Legacy. Calling hours will be held from 12-2 p.m. and 4-6 p.m, Monday, December 19 at the Chateaugay Funeral Home. A funeral service will be celebrated at 11 a.m, on Tuesday, December 20, at the Chateaugay United Methodist Church with Cora Smith. Burial will be held in the spring at the Eastside Cemetery, in Chateaugay. Memorial donations may be made to the Burke Volunteer Fire Department or the Burke Adult Center.

The family of Mr. M. Clark Mitchell created this Life Tributes page to make it easy to share your memories.

Send flowers to the Mitchell family.