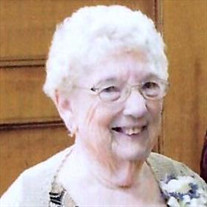 Margaret Alice McCue Barnes, 97, of Belle Ave., Chateaugay died Friday, Oct. 26, 2018 at The Alice Center, Malone, NY. Margaret was born in Malone, NY on July 1, 1921, she was the daughter of James J. and Alice S. (LaCount) McCue. She was united in marriage to Douglas C. Barnes on October 15, 1943 in Lyon Mountain by Father Kennedy. He predeceased her on April 12, 1998. Margaret graduated from Chateaugay High School in 1939. Early in her career, she worked as a bookkeeper for Sheffield Farms, Chateaugay and in the accounting department at Alice Hyde Hospital. Margaret worked at Key Bank in Chateaugay for 29 years, retiring in 1983 as bank manager. She was a past member of the Gay Unit Home Bureau, Chateaugay Bowling Association, the Chateaugay Memorial Library where she served as president, treasurer and board member. She was also a past member of the Bellmont Hi-Riders Snowmobile Club serving as treasurer, Key Bank Board of Directors, Malone Golf and Country Club and Burke Adult Center. Margaret enjoyed reading, TV movies and using her computer. She loved her family most of all. She is survived by two daughters and sons-in-law, Beverly and Michael Verna of Henderson, NV, Trudy and Arnold Lobdell of Burke, NY; her brother, Leon Legacy of Florida; two sisters, Lenore Legacy of Dexter, NY, and Patricia Adams of Minnesota. She is also survived by her grandchildren, John LaBombard, Dana Martin, Dena Harmon, Amanda Barnes, Aimee Hanna, Chet, Matthew and Kevin Lobdell; two step-grandchildren, Jessica Bellow and Alyssa Murray; ten great-grandchildren and several nieces and nephews. Besides her husband, she was predeceased by her parents; her son, Randy Barnes on July 4, 2018; two sisters and brothers-in-law, Katherine and Harry Bezio, Marjorie and Russell Bruso; a sister-in-law, Blanche Robinson and a daughter-in-law, Jackie Hoy Barnes. Family and friends may call at the Chateaugay Funeral Home on Friday, Nov. 2 from 10 to 11 a.m. A prayer service will immediately follow at 11 a.m. in the funeral home chapel. Burial will take place at Eastside Cemetery, Chateaugay. Donations in her memory may be made to the Alice Ballard Fund with Hospice of the North Country or the Chateaugay Fire Dept. and Rescue Squad.

The family of Mrs. Margaret Alice McCue Barnes created this Life Tributes page to make it easy to share your memories.

Send flowers to the Barnes family.