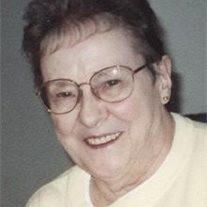 Margaret Mary Nichols, 82, of Ellenburg Depot, NY died Monday, March 9, 2015 at Meadowbrook Healthcare, Plattsburgh with her family by her side. Born in Clinton Mills, NY on Oct. 22, 1932, she was the daughter of Charles and Blanche (Dominy) Stevens. She was married to Francis J. Nichols on August 25, 1956 in St. Philomena's Church in Churubusco, NY. Mrs. Nichols graduated from Ellenburg Central School with the Class of 1950. She was a homemaker and mother who courageously battled Multiple Sclerosis for nearly 50 years. She was known for her outstanding family favorite dishes and baked goods, especially her apple pie. Mrs. Nichols is survived by her husband of 58 years; two children, Daniel Nichols and his wife, Lynn of St. Louis, MO, Tina Nichols of Strafford, NH; a sister, Shirley Oles of North Hill, CA; four grandchildren, CPT Jeffrey Nichols and his wife, Emily of the US Army stationed at Fort Campbell, KY, currently serving in Afghanistan, Laura Nichols of Des Moines, IA, Ryan Nichols of Dallas, TX, and Anna Prescott-Nichols of Strafford, NH. She was predeceased by her parents; two brothers, Harold and Robert Stevens, and a brother-in-law, Herbert Oles. At Margaret's request, there are no calling hours. A Mass of Christian Burial will be celebrated at 11 a.m. on Thursday, March 12 in Immaculate Heart of Mary Church, Churubusco with Rev. Ted Crosby officiating. Spring burial will take place at Sheldon Hill Cemetery, Ellenburg Depot. Donations in her memory may be made to the Ellenburg Depot Fire Dept. or a charity of one's choice.

Margaret Mary Nichols, 82, of Ellenburg Depot, NY died Monday, March 9, 2015 at Meadowbrook Healthcare, Plattsburgh with her family by her side. Born in Clinton Mills, NY on Oct. 22, 1932, she was the daughter of Charles and Blanche (Dominy)... View Obituary & Service Information

The family of Mrs. Margaret Mary Nichols created this Life Tributes page to make it easy to share your memories.

Send flowers to the Nichols family.