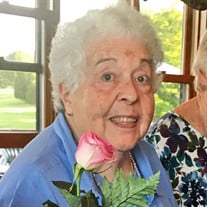 Margaret Elizabeth (Pennie) Sansone, 79, of Malone, NY passed away on Friday, May 22, 2020 at her home. Pennie was born in Malone on March 25, 1941 to John A. and Geneieve Martin Sansone. She graduated from St. Joseph’s Academy in 1958 and SUNY Buffalo in 1962 with a Bachelor’s Degree in Art Education. She taught Elementary Art in the Indian River Central School District and in Albion, NY schools for several years. Pennie developed an interest in Special Education when she taught Art in a Syracuse University pilot program for children with Autism in Fairmont, NY. She returned to Malone in 1971 and became involved in the beginnings of Children’s Corner, a preschool program for children with developmental disabilities. She earned NY State Certification in Special Education and taught in Franklin Essex Hamilton BOCES classrooms until she retired in 1996. Pennie enjoyed many artistic activities including photography, pottery, jewelry making and weaving. In later years, she was best known for her wonderful quilts. Her work was exhibited in many quilt shows in the North Country. She was active in many local organizations including the Franklin County House of History, the Malone Chapter of ADK, of which she was a founding member and the Adirondack Quilters Guild. She was a member of St. Andre Bessette Parish. Her greatest love, however, was the family camp at Lake Titus where she spent summers all of her life. Pennie is survived by her sister, Mary Ellen (Lonnie) Henry of Saranac Lake, nephews Chuck (Jennifer) Henry of Canton, Phil (Allison) Henry of Rutland, VT, and John Henry of Pittsburgh, PA, and grandniece and grandnephew Catherine and Maxwell Henry of Canton. Pennie was predeceased by her parents and aunt, Hazel LaPlante. There will be no public calling hours. A funeral Mass will be held privately according to current restrictions. Memorial donations may be made to the Malone Callfiremen or the Franklin County House of History.

The family of Ms. Margaret "Pennie" Sansone created this Life Tributes page to make it easy to share your memories.

Send flowers to the Sansone family.