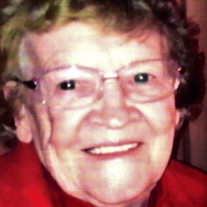 Marjorie Rose Matthews, 87 of Churubusco, passed away comfortably in her home on Friday, February 11, 2022 surrounded by her loving family and aided by Hospice of the North Country. Marjorie was born at her family homestead in Ellenburg on June 18, 1934, she was the daughter of Charles and Laura (Bushey) Trombley. She married Lester William (Bill) Matthews on February 13, 1956 at St. Edmund’s Church in Ellenburg. They have resided in Churubusco for over 50 years where together they owned and operated a dairy farm and raised their six children. Marjorie loved working on their family farm and had an amazing work ethic which she passed onto her children. She enjoyed feeding her animals, pickling and canning, listening to music and dancing, playing cards and reminiscing about the old days while looking through pictures. She was a very generous and spiritual woman. She loved her children, grandchildren and her great grandchildren and she never missed an opportunity to let them know. They were precious in her eyes and her greatest treasure. Marjorie is survived by her husband, Lester (Bill) Matthews of Churubusco; her children, Steven Matthews and his wife, Marion of Morrisonville, her daughter-in-law, Debbie Matthews of Altona, Allan Matthews and his wife, Colleen of Churubusco, Lisa Legacy and her husband, Robert of Chateaugay, Darlene Spoor and her husband, Shawn of Churubusco, Jeffrey Matthews and his wife, Shawn of Ellenburg; nine grandchildren, Karie and Scott Matthews, Kim Wilson and her husband, Kevin, Billy and Brandon Matthews, Ashley Ribot her husband, Jacob, Kayla Legacy, Cameron Matthews and Cory Spoor; four great grandchildren, Milo, Mason and Maddox Wilson and Amaiya Ribot; four sisters, Rita Malark, Thersea Powers, Beulah Whalen, Bertha Barcomb; two brothers, Walter and Leonard Trombley; as well as several nieces and nephews. She was predeceased by her son, Leon Matthews; a grandson, Jerry Matthews; a brother, Laverne Trombley and his wife, Theolus; a brother, Richard Trombley and his wife, Martha; four brothers-in-law, David Malark, Kenneth Powers, Bernard Whalen and Roger Barcomb; and a sister-in-law, Anne Trombley. At Marjorie’s request there will be no calling hours. A Mass of Christian Burial will be celebrated at St. Edmund’s Church, Ellenburg on Tuesday, February 15 at 11 a.m. Burial will be held at Immaculate Heart Cemetery, Churubusco, Tuesday, May 10 at 11 a.m. In lieu of flowers, donations in Marjorie’s memory may be made to the Churubusco Fire Department PO Box 26 Churubusco, NY 12923 and Hospice of the North Country 3909 State Route 11 Malone, NY 12953.

Marjorie Rose Matthews, 87 of Churubusco, passed away comfortably in her home on Friday, February 11, 2022 surrounded by her loving family and aided by Hospice of the North Country. Marjorie was born at her family homestead in Ellenburg on June... View Obituary & Service Information

The family of Mrs. Marjorie Rose Matthews created this Life Tributes page to make it easy to share your memories.

Send flowers to the Matthews family.