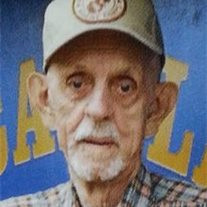 Marvin F. Blow, 87, of Lake St., Chateaugay died Wednesday, Oct. 7, 2015 at The Alice Center, Malone, NY. Born in Ellenburg, NY on Jan. 21, 1928, he was the son of Merritt and Mary Ann (Cook) Blow. He was married to Patricia Poupore on June 23, 1951 in Chateaugay, NY. She predeceased him on March 9, 1977. Marvin enlisted in the U.S. Air Force in 1946 and served during World War II, the Korean Conflict and the Vietnam War. He was honorably discharged in 1967 after 21 years of service. He was then employed as a salesman for Malone Dairy, retiring in 1979. He was a member of the Ellenburg VFW and the American Legion Post 875 in Chateaugay. Marvin was always on the go. He loved mowing lawns and would spend hours on his mower until he was 85. He took great pride in his garden; his tomatoes were his prize crop. Marvin was also a volunteer for the VFW for several years. He was very knowledgeable of our US government/legislation. He kept his family very informed of current events concerning our nation and teased you if you weren't Republican. He also enjoyed making maple syrup, snow blowing, playing the lottery, having a dip and Fox News. Marvin is survived by two daughters and sons-in-law, Lisa and Floyd Spoor of Chateaugay, Connie and Bruce Martin of Chateaugay; six grandchildren, Marlana Hodges and her husband, Austin of Chateaugay, Sgt. Cory Spoor of Camp Lejeune, NC, Tony Martin and his wife, Tara of Chateaugay, Todd Martin and his wife, Terra of North Bangor, Andrea Malark and her husband, Ben of Chateaugay, Angie Martin of Chateaugay; six great-grandchildren; three siblings, William Blow and his wife, Sis of Chateaugay, Doris Hebert of Ellenburg, Carl Blow and his wife, Joan of Florida; a sister-in-law, Gena Blow of Ellenburg. Besides his wife, he was predeceased by his parents; two sisters, Helen Miller and Katherine Blow; three brothers, James, Roland and Henry Blow. Services will be private and at the convenience of the family.

The family of Mr. Marvin F. Blow created this Life Tributes page to make it easy to share your memories.