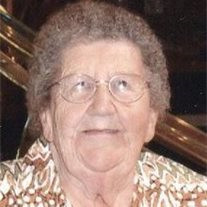 Mary Shutts Gilmore, 87 of Merrill died Sunday, December 20, 2015 at CVPH Medical Center. She was born in Merrill, NY on September 18, 1928; the daughter of Maurice and Rose (King) Shutts and lived her whole life in the hamlet of Merrill. Mary was a woman of the earth and loved all God's creations great and small. She was an avid outdoors woman; enjoying fishing, hunting and gardening. To her, there wasn't anything better than drowning a worm in Chateaugay Lake and drinking a beer with one of her sisters. She attended grade school at the one room schoolhouse in Merrill and transferred to Lyon Mountain High School. Forced to leave high school to care for her ailing mother, she later obtained her GED. She was always very proud of this accomplishment. When most of her children were in school, so was she. Mary was an avid bowler and was a member of the Chateaugay Women's Bowling Association, the Malone Women's Bowling Association and the Quebec Bowlers Club. She also spent many years teaching the sport to the youth of Merrill. Most Saturday's from September through April, you could find Mary with a station wagon full of kids on their way to the bowling alley. She also assisted in the coaching of the sport for Ellenburg Central School. Always a hard worker, Mary held several jobs over her lifetime. Some of these jobs included stable hand, short order cook, waitress, cleaning camps, picking potatoes, child care, hand laster at local slipper factories and retired as Bindery Supervisor from The Northeast Group, Plattsburgh. On May 5, 1951 she married of love of her life, Norman "Tiny" Gilmore in St. Bernard's Church, Lyon Mountain. He predeceased her on July 21, 2002. Together, they raised a family of 8 children. This was her most cherished "job". This is where she did her greatest work. Teaching them about life and how to handle adversity with strength and dignity. In addition to her husband, Mary was predeceased by her parents; two brothers, Lester and Robert Shutts; three sisters, Carolyn Duval, Helen Parent and Rachel Klinski and one son-in law, Larry Garrow. She is survived by her 8 children and spouses; Bruce (Diane) Shutts, Paul (Amanda) Gilmore, Cynthia Gilmore, Brenda (Matthew) Brown all of Merrill; and Cecilia Garrow of Plattsburgh, Roger Gilmore of Malone, MaryRita Gilmore and Linda (Alfred) Kalvaitis of West Chazy. Grandchildren; Stacey LaMountain, Bruce Shutts II, Rebecca Corral, Nicole O'Connell, Jacob Garrow, Amy Frederick, Matthew Gilmore, Emily Gilmore, Corey Connors, Travis Connors, Jamie Gilmore, Shae LaPorte, Nathan Gilmore, Ashley Ryan and Katy Brown. 18 great grandchildren and 1 great great granddaughter and several nieces and nephews. Calling hours will be held at the Chateaugay Funeral Home on Tuesday, December 22 from 2 to 4 and 7 to 9 PM. Funeral services will be at 1:00 PM on Wednesday, December 23 in the funeral home chapel. Entombment will take place at Whispering Maples Memorial Gardens, Ellenburg Depot. Donations in her memory may be made to the Lyon Mountain Fire Department or to the family to use at their discretion

Mary Shutts Gilmore, 87 of Merrill died Sunday, December 20, 2015 at CVPH Medical Center. She was born in Merrill, NY on September 18, 1928; the daughter of Maurice and Rose (King) Shutts and lived her whole life in the hamlet of Merrill. Mary... View Obituary & Service Information

The family of Mrs. Mary Shutts Gilmore created this Life Tributes page to make it easy to share your memories.

Send flowers to the Gilmore family.