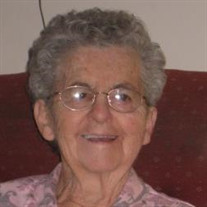 Mary Francis Legacy (Marie Ange F. Boileau), 90, of Spencer Road in Burke New York, passed away peacefully on August 23,2017 at the Alice Center in Malone, with her family by her side. She will always be remembered as a loving wife, mother, mother-in-law, grandmother, sister, and aunt. Born in Champlain New York, Nov. 16 1926, she was the daughter of Albert and O’Bella Bedard Boileau. Mary moved to North Bangor when she was 4 to live with her grandparents, Emelina and Napoleon Boileau, on their family operated farm. She graduated from Brushton High School in 1944. In 1945, she moved with her family to Burke where they continued to farm. On June 27,1951, she married William Legacy Jr. at St George’s Church in Burke. She and her husband operated a dairy farm on Spencer Rd in Burke until 1976. After the sale of the family farm, they built a home on Spencer Rd and remained there the rest of their lives. Mary was an active member of the Burke Grange for 50 years and a Franklin County 4-H leader for 35 years. Her and her husband were members of Farm Bureau. She was a secretary/bookkeeper for Homestead Construction for many years and an active parishioner at St George’s Church in Burke. She enjoyed gardening, playing cards and spending time with her grandchildren. Mary is survived by her sons Michael in Dallas Texas, Edward and his wife Sharon (Tomter) of Malone, Robert and his wife Lisa (Matthews) of Chateaugay, and her daughter Susan and her husband Kevin Hewlett of Framingham, MA; six grandchildren, Travis, Shawn, Ashley and Kayla Legacy and Katherine and Julie Hewlett. She is also survived by 2 half-brothers; Alan Boileau, Jacques and his wife Raymonde Boileau, and 2 half-sisters; Irene Boileau, Aline and her husband Rolland Goyette, all of St. Jean, Quebec, a sister-in-law Shirley (Dufrane) Boileau of Malone, along with many nieces and nephews. She was predeceased by her husband William, their son John, and three brothers; Francis, Armand, and John Paul. Calling Hours will be at St Mary-Murphy-Wilcox Funeral home in Malone, on Monday, Aug 28, from 9 to 11 a.m. Immediately following, a Mass of Christian Burial will be held at St George’s Church in Burke at 11:30. Burial will take place at Notre Dame Cemetery. In lieu of flowers, memorial donations can be given to the Burke Volunteer Fire and Rescue Department or St George’s Church in Burke.

Mary Francis Legacy (Marie Ange F. Boileau), 90, of Spencer Road in Burke New York, passed away peacefully on August 23,2017 at the Alice Center in Malone, with her family by her side. She will always be remembered as a loving wife, mother,... View Obituary & Service Information

The family of Mrs. Mary Francis Legacy created this Life Tributes page to make it easy to share your memories.

Send flowers to the Legacy family.