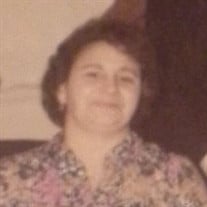 Mary Jane Raville, 84, of Washington St., Malone died Sunday, December 23, 2018 at the Alice Hyde Medical Center, Malone. Born on Jan. 16, 1934 in Malone, NY, she was the daughter of John and Hazel (Lamica) Russell. She was married to Francis “Red” Raville on June 28, 1980. He predeceased her on Jan. 6, 2008. Mrs. Raville lived most of her life in Malone and attended Malone schools. In her early years, she was employed by Tru-Stitch Moccasin Corp. for 10 years. She then was employed in the restaurant business for Judy’s Mountain View Inn and later at the Trailside Bar and Restaurant in Owls Head, retiring in 2004. She is survived by three sons and daughters-in-law, Wade and Diane Brunelle of Holyoke, MA, Rickey and Lisa Beckett of Westfield, MA, Brian and Laura Beckett of South Hampton, MA; two daughters and a son-in-law, Grace Beckett of Pittsfield, MA, Gail and Donald Murray of Barre, VT; a daughter-in-law, Annette Beckett of Chateaugay; ten grandchildren; 14 great-grandchildren; a great-great-grandson; three brothers and sisters-in-law, Richard and Jean Russell of Malone, Roderick and Roxanne Russell of Nazareth, PA, Wayne and Jackie Russell of Sturbridge, MA; two sisters, Laraine Mulverhill and Lynda LaMay both of Malone; several nieces and nephews. Besides her husband, she was predeceased by her parents; a son, John Beckett on Feb. 17, 2011; a granddaughter, Cassie Beckett and a sister, Judy Russell in infancy. There are no calling hours. A Mass of Christian Burial will take place in the spring and will be announced at that time. In lieu of flowers, donations in her memory may be made to the Shriner’s Hospital for Children, 516 Carew St., Springfield, MA 01104.

Mary Jane Raville, 84, of Washington St., Malone died Sunday, December 23, 2018 at the Alice Hyde Medical Center, Malone. Born on Jan. 16, 1934 in Malone, NY, she was the daughter of John and Hazel (Lamica) Russell. She was married to Francis... View Obituary & Service Information

The family of Mrs. Mary Jane Raville created this Life Tributes page to make it easy to share your memories.

Send flowers to the Raville family.