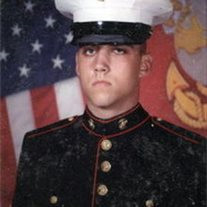 Mathew David Johnston, 26, of East Main St., Chateaugay died Friday, July 5, 2013 at the Alice Hyde Medical Center, Malone. Born on Dec. 10, 1986 in Plattsburgh, he was the son of William J. and Nancy L. (Yelle) Johnston. On Dec. 18, 2005, he was married to Candi L. Blow in Burke. He attended Chateaugay Central School and graduated with the class of 2005. He then entered the United States Marine Corps in July 2005 in which he served two years in Japan and then California. He was honorably discharged in July 2009. He was an avid horse rider, John Deere enthusiast, truck driver and outdoor lover. Besides his wife and parents, he is survived by three children, Jezlyn, age 4, and Mavrick and Mason, age 8 months; a brother, Marc of Burke; a sister, Mandie Johnston and her fiancé Arron Patterson of Burke; maternal grandmother, Vivian Yelle of Chateaugay; and several aunts, uncles, cousins, nieces and nephews. He was predeceased by his paternal grandparents, James G. and Gertrude Johnston Sr.; and maternal grandfather, Gaston Yelle. Calling hours will be held at the Chateaugay Funeral Home on Tuesday, July 9 from 2 to 4 and 7 to 9 p.m. A Mass of Christian Burial will be celebrated at 11 a.m. on Wednesday, July 10 in St. Patrick's Church, Chateaugay with Rev. John Looby officiating. Burial will take place at Burke Center Cemetery. A reception will follow at the Chateaugay American Legion.

The family of Mr. Mathew David Johnston created this Life Tributes page to make it easy to share your memories.

Send flowers to the Johnston family.