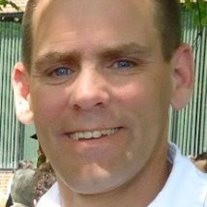 Matthew P. Davis "Matt", 43, of State Rt. 345, Potsdam died Tuesday, March 4, 2014 at Fletcher Allen Health Care, Burlington, VT. Born in Malone, NY on May 4, 1970, he was the son of Ronald and Constance (Peacock) Davis. He was married to Lori Gilbert on December 27, 2012 in Fort Meyers Beach, FL. Matt graduated from South Jefferson Central School in Adams, NY and earned a Bachelor's Degree from Oswego State College. He was employed as a plant manager at North Country Dairy, North Lawrence. Matt was previously employed at McCadam Cheese and Cabot in management positions in Cabot, VT and Heuvelton, NY. He was a member of the New York State Cheese Association. Even with his disease (Cystic Fibrosis), he was an avid mountain climber having climbed Mount St. Helen's in Washington state and several local mountains in the adirondacks. Matt enjoyed being outdoors and loved wilderness camping. In 2012, he was the key note speaker at the retirement of Dr. Ronald Perciaccante who had treated Matt since the age of 7. Matt is survived by his parents of Chateaugay; his wife of Potsdam; a sister and brother-in-law, Elizabeth and Aaron Firman of Alburn, WA; a son, Brandon Buchta and his companion, Emily Fanning; a daughter, Ashley Gilbert and her companion, Joseph Hargrave; two grandsons, Noah and Dominic; two nephews, Matthew and Miles Firman; his father-in-law and mother-in-law, Ed and OraAnne Gilbert of Wellesley Island, NY; step-grandfather, Ken Cheyne of Chateaugay; several aunts, uncles and cousins; his two dogs, Yukon and Jager. He was predeceased by his maternal and paternal grandparents. Calling hours will be held at the Chateaugay Funeral Home on Friday, March 7 from 1 to 3 and 5 to 7 p.m. A prayer service will be held at 12 noon on Saturday, March 8 in the funeral home chapel with Rev. Ted Crosby of St. Bernard's Church, Lyon Mountain officiating. Donations in his memory may be made to the Adirondack Humane Society in Plattsburgh, the Chateaugay Memorial Library or Holy Family School in Malone.

The family of Mr. Matthew "Matt" Davis created this Life Tributes page to make it easy to share your memories.

Send flowers to the Davis family.