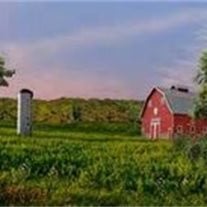 Michael LaBare, 57, of Chateaugay, passed away Thursday, March 24, 2016 at the UVM Health Network – CVPH in Plattsburgh. He was born in Malone, NY on November 3, 1958, the son of Dale and Barbara (Mills) LaBare. Mike was raised in Chateaugay and graduated from Chateaugay Central School in 1976. Growing up he worked on the family farm and after high school bought his own farm. He farmed most of his life. He was then employed by Perham Trucking, and was most recently employed by Tri-County Milk Movers. He was a communicant of St. Patrick's Church. He enjoyed his trips to the casino, but most of all his favorite time was spent with his grandkids, and cropping with his son. He was married to Marie Campbell Cook which ended in divorce. In 2003, he was united in marriage to Karen Supernault. She survives. Along with his wife and mother, Mike is survived by his two daughters and their spouses, Darby (Irving) Monette of Chateaugay, and Cortney (Alan) Harkleroad of Virginia Beach, and a son and his wife, Kyle (Barbara Johnston) LaBare of Chateaugay; a step-son, Brian Broeker and his companion, Ryah Stark of Malone; five grandchildren, Alexis and Hannah Monette, Asa Harkleroad, Cameron LaBare, and Jake Stark; three brothers, Rick (Kathy) of Burke, Craig (Lynne) of Burke, Peter of Chateaugay; and three sisters, Kim (Darrell) Boadway of Kentucky, Amy (Toby) LaClair of Chateaugay, and Stacy (Steve) McDonald of Chateaugay; several aunts, uncles, nieces, nephews and cousins. Mike was predeceased by his father on August 31, 1991. There are no calling hours. A Mass of Christian Burial will be held at 10 a.m. on Wednesday, March 30 in St. Patrick's Church with Rev. Thomas Kornmeyer officiating. A reception will immediately follow at the Chateaugay American Legion. In lieu of flowers, donations in his memory may be made to the American Cancer Society.

Michael LaBare, 57, of Chateaugay, passed away Thursday, March 24, 2016 at the UVM Health Network &#8211; CVPH in Plattsburgh. He was born in Malone, NY on November 3, 1958, the son of Dale and Barbara (Mills) LaBare. Mike was raised in Chateaugay... View Obituary & Service Information

The family of Mr. Michael LaBare created this Life Tributes page to make it easy to share your memories.

Send flowers to the LaBare family.