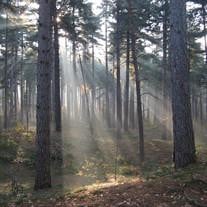 Michael D. Stickney passed away peacefully Saturday, August 18, 2018 before sunrise at the Alice Hyde Memorial Hospital where he had been a patient since Friday, August 10, 2018. Michael was born March 4, 1951, the son of Douglas and Joan (McCarthy) Stickney of Malone, New York. He attended local schools and graduated from Franklin Academy, “The Class of 1969”. He graduated from Paul Smiths College in 1971 with a degree in Forestry Management. On November 6, 1976, he was united in marriage to the former Patricia S. Guerin in Knox, New York. She survives. Michael was employed with the Department of Environmental Conservation in the Forestry Management Division from 1973 to his retirement from the Reynolds Game Farm as a Senior Technician in the Pheasant Raise and Release Program in 2005. He followed in the footsteps of his uncle, Robert Stickney, finding peace and harmony in the great outdoors. While employed with the Department of Environmental Conservation, he also worked with writers, writing and illustrating books and manuals for wildlife articles. He was also an artist, painting wildlife scenes in different mediums. Family and friends were fortunate to be recipients of his works. Some of his works were auctioned off at fundraisers for the Department of Environmental Conservation. He was a Brother of the American Mountain Men, an organization depicting the fur trade era. He was thought very highly of due to his skills and was given the name “Gnome”. He was a guide for many hunting and fishing expeditions. He had a great gift of his surroundings which made him an asset on the expeditions. Michael also enjoyed building and repairing homes in his spare time. His greatest achievement was the building of his home in Duane with his wife, Patricia. Surviving besides his wife of 41 years are two daughters and sons-in-law, Lydia (Ray) Sullivan of West Virginia and Lisette (Kenne) Moore of Oxford, New York. He is also survived by four grandchildren, Hunter and Savanna Sullivan and Calvin and Chase Moore. Michael is also survived by his mother, Joan Stickney of Malone and three brothers, James (Patty) Stickney, Douglas (Cheryl) Stickney and David (Lisa) Stickney, all of Malone; two sisters, Carol Thompson and Cathy (Jay) Pratt, both of New Hampshire. Michael was predeceased by his father, Douglas. His greatest joys were his daughters, their spouses and his grandchildren. They brought many joyful moments to his life. He was very proud of Lydia and Lisette and their achievements. He enjoyed sharing with them the knowledge of this great earth that is a gift to all. He will be greatly missed by his wife, Patricia, the love of his life and the spirit and breath of their marriage. There will be a private celebration of his life at the convenience of his family.

Michael D. Stickney passed away peacefully Saturday, August 18, 2018 before sunrise at the Alice Hyde Memorial Hospital where he had been a patient since Friday, August 10, 2018. Michael was born March 4, 1951, the son of Douglas and Joan (McCarthy)... View Obituary & Service Information

The family of Mr. Michael D. Stickney created this Life Tributes page to make it easy to share your memories.

Send flowers to the Stickney family.