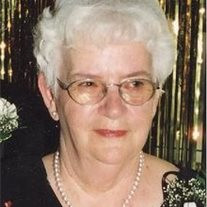 Myrna Cowan, 80, of the Earlville Rd., Chateaugay died Monday, Nov. 10, 2014 at her home surrounded by her loving family and Hospice of the North Country. Born in Burke, NY on Dec. 3, 1933, she was the daughter of Floyd and Beatrice (Avery) Cook. She was married to Erwin Lyle Cowan on May 5, 1951 in Chateaugay United Methodist Church by Rev. Nichols. Myrna attended Chateaugay Central School. She was employed as bookkeeper for Cowan's Landscaping and Cowan's Esso Station in Burke. She was a member of the Chateaugay United Methodist Church. Mrs. Cowan was very dedicated to her family. Myrna is survived by her husband of 63 years; seven children and their spouses, Christine and Jim Mueller of Chateaugay, Kyna Dupree of Plattsburgh, Connie Cowan and her companion, Richard Hayes of Lake Clear, Cheri and Tom Welch of Constable, Brenda and JR Rivers of South Glens Falls, Donna and Dennis Perry of New Mexico, Fay and Keith Palmer of Burke; 19 grandchildren; 26 great-grandchildren; two brothers and a sister-in-law, Irving and June Cook of Chateaugay, Edmund Cook of Florida; two sisters and brothers-in-law, Marlene and Lloyd Russell of Florida, Sandra and Dennis Morse of Syracuse; several nieces and nephews. She was predeceased by her parents; two sons, Kevin Cowan, Jimmy Cowan; a granddaughter, Tracy Cook; two grandsons, Kevin Cayea, Dennis Perry Jr.; a brother, Richard Cook; two sisters, Ardith Durkee, Vennita Cook and a step-sister, Gweneth Thompson. Calling hours will be held at the Chateaugay Funeral Home on Friday, Nov. 14 from 6 to 8 p.m. Funeral services and burial will be private and at the convenience of the family. Myrna's family would like family and friends to join them a the Knights of Columbus, Chateaugay on Saturday, Nov. 15 at 12:30 p.m. to celebrate her life.

Myrna Cowan, 80, of the Earlville Rd., Chateaugay died Monday, Nov. 10, 2014 at her home surrounded by her loving family and Hospice of the North Country. Born in Burke, NY on Dec. 3, 1933, she was the daughter of Floyd and Beatrice (Avery)... View Obituary & Service Information

The family of Mrs. Myrna Cowan created this Life Tributes page to make it easy to share your memories.