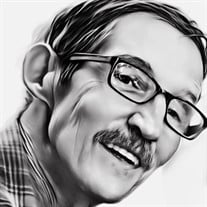 Paul George Gardner, 73, of Cadyville, NY, passed away May 17, 2022 at his home surrounded by his loving family. Born on March 19, 1949 in Schenectady, NY, he was the son of Vernon and Greta (Vanderbogart) Gardner. He was married to Jean Therrian on October 2, 1971 in Holy Angels Church, Altona. Paul graduated from Mount Pleasant High School in Schenectady. He enlisted in the United States Army in August 1967 and was honorably discharged in August 1970. He served in Vietnam in the Tet offensive 1969 and the Tet Counteroffensive phase IV, V, and VI. He retired from Hannaford in Plattsburgh where he worked as a butcher. Paul loved to fish, play pool, bowl, playing games on his tablet and beating his children at a game of Scrabble. He loved classic rock music, especially Tom Petty and he enjoyed spending time with his family and wife. Paul is survived by his wife of 50 years, Jean Gardner; five children, Sinda Blea and her husband, Richard of Duncan, SC, Bryan Gardner and his wife, Courtney of West Chazy, Jessey Lavene and her husband, Bill of Morrisonville, Jason Gardner of West Chazy, Leah Jubert and her husband, Jason of Chazy; six grandchildren, Josey and Toryn Lavene, Taylor, Justin and Audrey Senecal and Alex Jubert; five siblings, Bruce Gardner and his wife, Renee, Ronald Gardner and his wife, Donna, Elric Gardner, Carol Gardner-Allen, Butch Vanderbogart; as well as several nieces and nephews. He was predeceased by his parents; a granddaughter, Cansas Bushey; a brother, James (Jimmy) Gardner; an uncle, George Vanderbogart; his mother and father-in-law, Howard and Shirley Pecor; a brother-in-law, Howard Pecor Jr.; and his beloved dog, Demi Bones. A graveside service will be held on Monday, May 23, 2022 at 1 p.m. at Holy Angel’s Church Cemetery, Altona. Donations in Paul’s memory may be made to a charity of the family’s choice.

Paul George Gardner, 73, of Cadyville, NY, passed away May 17, 2022 at his home surrounded by his loving family. Born on March 19, 1949 in Schenectady, NY, he was the son of Vernon and Greta (Vanderbogart) Gardner. He was married to Jean Therrian... View Obituary & Service Information

The family of Mr. Paul George Gardner created this Life Tributes page to make it easy to share your memories.