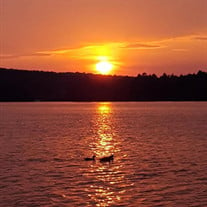 Phyllis A. Smith, 76, of Malone died Saturday, March 27, 2021 at her home surrounded by her loving family. Born on July 9, 1944 in Malone, NY, she was the daughter of Albert and Margaret (Johnson) Ashlaw. They predeceased her. She married the love of her life, Kieth E. Smith on June 13, 1987. He predeceased her on March 3, 2017. Phyllis graduated from Franklin Academy in 1963. While in high school, she worked in the credit department at Sears Dept. Store for five years then went to Empsalls Dept. Store for nine years. She was then employed by Marine Midland Bank (HSBC Bank) in 1980 doing loans, accounts etc. She retired in 2005 after 25 years of service at the bank. She and her husband enjoyed traveling. After retiring, she was missing people and went to work for Earl Sauve Insurance for five years and after that she worked in the office at St. Joseph’s Church as a receptionist for five years. In June 2015, she had to retire due to health conditions. When able Phyllis loved to attend her grandchildren’s sporting events. She is survived by seven children and their spouses, Pam and Dave Bilow of Malone, Mark Prairie of Malone, Keith and Andrea Prairie of Mechanicville, Vicki Smith of Malone, Kerry and Kathy Smith of Malone, Nadine and Brian Leary of Chateaugay, Jeff and Michele Smith of Ithaca; grandchildren, Alexis Manor, Cory Prairie, Luke Prairie and his wife, Kristen, Sarah and Glenn Prairie, Cameron and Grace Smith, Keegan, Riley and Ian Leary, Emily Smith, Mariah Bilow Josilo and her husband, Bojan, Jordyn Bilow and her partner, Evan Hanna; a great-granddaughter, Hailey Prairie; a brother, Richard Ashlaw and his wife, Hedy of Victor, NY; two sisters-in-law, Virginia Ashlaw of Williamson, NY, Linda Ashlaw of Burke, NY; a brother-in-law, Greg Demarse of Plattsburgh; brothers-in-law and sisters-in-law, Richard and Norma Smith of Syracuse, Neil and Virginia Smith of Burke, Joan Prairie of Bombay; she is also survived by many nieces and nephews who she loved dearly. Besides her husband and parents, she was predeceased by her mother-in-law and father-in-law, Earl and Ester Smith; brothers, Darrell and Donald Ashlaw; sister, Debbie Demarse; brother-in-law, Brian Smith; sisters and brothers-in-law, Theresa and Paul Marlow, Lorraine and Ken McCable, Rita and Dick Durham. Calling hours will be held at St. Mary-Murphy-Wilcox Funeral Home on Friday, August 6, 2021 from 12 p.m. to 1:45 p.m. A Mass of Christian Burial will be celebrated at Notre Dame Church, Malone following visitation at 2 p.m. The Mass will be live streamed on the Saint Andre Bessette Roman Catholic Parish Facebook page. Burial will take place at St. Joseph's Cemetery, Lake Titus Road, Malone. Donations in her memory may be made to Hospice of the North Country and St. Andre Bessette Parish.

Phyllis A. Smith, 76, of Malone died Saturday, March 27, 2021 at her home surrounded by her loving family. Born on July 9, 1944 in Malone, NY, she was the daughter of Albert and Margaret (Johnson) Ashlaw. They predeceased her. She married the... View Obituary & Service Information

The family of Mrs. Phyllis A. Smith created this Life Tributes page to make it easy to share your memories.

Send flowers to the Smith family.