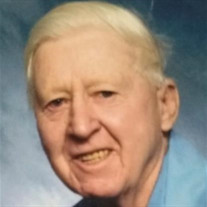 Raymond ”Bubby” Wilcox, 81, of Chateaugay, died Friday, August 3, 2018 at the Alice Hyde Medical Center, Malone, NY. Born on August 3, 1937 in Chateaugay, NY, he was the son of Marshall and Martha (Duval) Wilcox. He attended Chateaugay Central School. In 1960, he enlisted in the United States Army and was honorably discharged in 1962. In his earlier years, he was employed as a laborer for several different businesses. He was a great dad and an awesome grandfather. He is survived by a companion, Donna Lewis; a daughter, Sabrina Aspelund and her husband, Andrew of Chateaugay; twin grandchildren, Charles and Rayanna Aspelund of Chateaugay; and many nieces, nephews and cousins. He was predeceased by his parents, 3 brothers, James, Donald and Michael Wilcox, 2 sisters, Martha Lynn Calkins and Patricia Otis. There will be no calling hours. A graveside service will be held on Friday, August 10 at 2 p.m. at Eastside Cemetery, Chateaugay with CLM Cora Smith officiating. Burial will be held in Eastside Cemetery, Chateaugay.

The family of Mr. Raymond "Bubby" Wilcox created this Life Tributes page to make it easy to share your memories.

Send flowers to the Wilcox family.