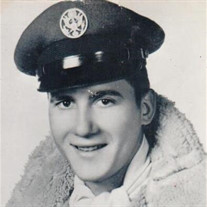 Richard “Joe” A. Gokey, 82, of Malone died Wednesday, June 7, 2017 at the Alice Center, Malone surrounded by his loving family. Born in Malone, NY on July 28, 1934, he was the son of Alfred and Edna (Gonyea) Gokey. He was married to Helen Lindsay on Nov. 30, 1957 in Rockburn, Quebec, Canada. Joe graduated from Franklin Academy with the Class of 1952. He enlisted in the US Air Force on Jan. 6, 1953 and was honorably discharged on Dec. 7, 1956. He was employed as an electrical engineer for General Motor, Massena from 1959 to 1989, retiring as maintenance supervisor. After retirement, he became a self-employed electrician and was a consultant for a subcontractor at General Motors. Joe helped with the construction of Bare Hill Correctional Facility where he was known as “clerk of the works.” He served as former trustee and mayor of the village of Malone. Joe was a member of the Malone Rec Park Commission, Everton Hunting Club, Bobcat Club, Standing Tall Club, Malone Golf Club, Amvets, Malone American Legion and the Elks. He was a former coach for Little League and enjoyed bowling, golfing, hunting and fishing. He is survived by his wife of 59 years; two sons and a daughter-in-law, Brian L. and Laura Marie Gokey of Malone, Steven G. Gokey of Malone; a grandson, Michael J. Gokey of Johnstown, PA; two great-grandchildren, Audrey M. Gokey and Adalyn C. Gokey of Johnstown, PA; two sisters-in-law, Dawn Gokey of Malone and Pat Harness of Ontario, Canada. He was predeceased by his parents and five siblings, Rose Johnson, Francis, Douglas and Roy Gokey and Cora Lee Barney Haley. There are no calling hours. A Mass of Christian Burial will be celebrated at 10 a.m. on Saturday, June 10 in Notre Dame Church, Malone. Burial will take place at Notre Dame Cemetery. Donations in his memory may be made to the Malone Callfiremen or Malone EMS.

The family of Mr. Richard "Joe" A. Gokey created this Life Tributes page to make it easy to share your memories.

Send flowers to the Gokey family.