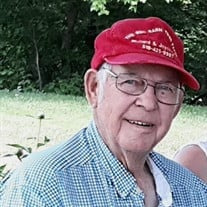 Richard “Dick” King, 85, of County Route 24, Bellmont, passed away Thursday, December 2, 2021 at his home with his loving family by his side and aided by Hospice of the North Country. Born on June 22, 1936 in Burke, NY, he was the son of Leonard and Gladys (Soulia) King. Dick married Joyce Dupra on November 24, 1956 in Notre Dame Church, Malone, NY by Rev. Roger Martin. At the age of 16, Dick left school to help on the family farm. He worked on the St. Lawrence Seaway, Barnhart Island from beginning to end of construction. Dick worked road construction for the Laborer Union of Plattsburgh for 32 years. Then, with his Dad, began what would become his life-long career for fifty years with his wife, Joyce, in 1987, “The Red Barn Tree Farm” plantation, teaching his children and grandchildren what tree farming was all about. As an outdoorsman and woodsman, Dick enjoyed the land and nature by cultivating the Christmas Tree plantation and home yard, hobby farming, gardening, hunting and fishing. Along with Joyce, he was an avid collector of antiques and collectibles and enjoyed playing cards with family and friends. Dick will be remembered for his stoic work ethics, dedicated to a life with and for his family, his wise, humble, kind and generous nature along with a keen sense of humor from the “old school” era. Dick is survived by his wife of 65 years, Joyce; three children, Richie King and his wife, Paula, Penny Landry and her husband, Scott, Judy and her companion, Jim Benware. Ten grandchildren; Jason Landry, Adam King and his fiancé, Natalie (Tetreault), Lindsey Edwards and her husband, Zachary, Jeremy King and his wife, Caitlin, Ashley Landry, Derrick King and his wife, Sara, Gregory King and his fiancé, Amy (Corneck), Benjamin Hammill, Gabrielle Lafleur and her fiancé, Joseph (Lamitie), Olivia Lafleur and her companion, Jared (Trombley); 13 great grandchildren; a sister, Sandra Cosgrove and her companion, Mike Gully; two sisters-in-law, Nancy King and Debbie King, as well as several nieces and nephews. He was predeceased by his parents; two brothers, William (Bill) King and John King; a sister, Baby King; two sisters and brothers-in-law, Edna and Fred Fields, Linda and Leonard Johnson. Burial will be held in Brainardsville Cemetery, Brainardsville, NY at the convenience of the family. Donations can be made to Malone Hospice of The North Country and the American Cancer Society.

The family of Mr. Richard "Dick" King created this Life Tributes page to make it easy to share your memories.