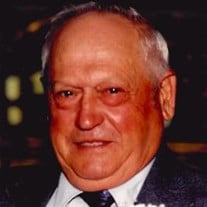 Richard C. Trombley, 92 of Ellenburg Center passed away May 27, 2019 at University of Vermont CVPH Center surrounded by his loving family. The son of Charles and Laura (Bushey) Trombley, he was born on August 24, 1926 in Ellenburg, NY. Richard married Martha LaValley on November 17, 1948. Richard owned and operated a dairy farm for over 20 years. He also worked for many years at the Ellenburg Highway Department and the Plattsburgh Air Force Base Snow Removal. He was the town highway superintendent of Ellenburg from 1988 – 1991. Richard was an active member for many years of the Knights of Columbus and the Ellenburg Center Fire Department. Richard took great pride in his garden. He loved sharing his bounty of tomatoes and cucumbers. Picking strawberries and blueberries was a favorite past-time which he shared with his grandchildren. Left behind to cherish Richard’s memories is his companion of 13 years Donna Goodrow and her children; his sons and daughters-in-law, Lester and Deborah Trombley, Wayne and Rosemary Trombley, and Richard, Jr. and Linda Trombley; his daughter and son-in-law, Sandy and Stewart Smith; ten grandchildren; 20 great-grandchildren; sisters, Rita Malark of North Creek, Theresa Powers of Beekmantown, Beulah Whalen of Morrisonville, Bertha Barcomb of Plattsburgh; a sister and brother in-law, Margie and Billy Matthews of Churubusco; a brother and sister in-law, Walter and Ann Trombley of Ellenburg Center, and brother, Leonard Trombley of Plattsburgh; sisters-in-law, Theolus Trombley of Ellenburg Center, Stella Mercer of Montgomery, AL, and Geraldine Ramos of Cocoa, FL; and brother in-law, Floyd LaValley of Plattsburgh and many nieces and nephews. Richard was predeceased by his wife Martha on June 23, 1992; his parents Charles and Laura; father and mother-in-law, Fred and Mabel LaValley; brother, Laverne Trombley; brothers-in-law, David Malark, Ken Powers, Bernard Whalen, Roger Barcomb, Jerry Mercer, and Florentino Ramos; sisters-in-law, Joyce LaValley; grandson, Trent Trombley on May 17, 2019; and great-granddaughter Brooke Trombley. Calling hours will be held at the Chateaugay Funeral Home on May 31, 2019 from 12 p.m. to 2:30 p.m. A prayer service will immediately follow in the funeral home chapel at 2:30 p.m. Burial will be held at the St. Edmund’s Cemetery, Ellenburg. A luncheon will be held following the burial at the Ellenburg Center Fire Department. In lieu of flowers, donations may be made to the Ellenburg Center Fire Department.

Richard C. Trombley, 92 of Ellenburg Center passed away May 27, 2019 at University of Vermont CVPH Center surrounded by his loving family. The son of Charles and Laura (Bushey) Trombley, he was born on August 24, 1926 in Ellenburg, NY. Richard... View Obituary & Service Information

The family of Mr. Richard C. Trombley created this Life Tributes page to make it easy to share your memories.

Send flowers to the Trombley family.