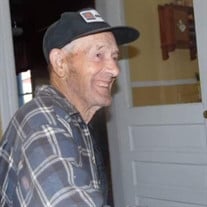 Robert “Bob” Bracy, 95, of Chateaugay, died Monday, March 2, 2020 at the Alice Center, Malone. Born on February 13, 1925 in Chateaugay, NY, he was the son of George and Maude (LaPlant) Bracy. He was married to Ada F. Porter on November 27, 1948 in Burke, NY. She predeceased him on May 19, 2002. Bob was a dedicated husband and father. He loved working on his farm, which he bought at the age of 16. He also enjoyed hunting, fishing and snow sledding. He was a 4-H leader and worked the dairy cattle shows at the Franklin County Fair with his grandchildren. He was a lifetime member of the Bellmont Hi-Riders Snowmobile Club and the Chateaugay United Methodist Church. Bob is survived by his four sons, Roger Bracy and his wife, Sue of Merrill, Reginald Bracy and his wife, Deborah of West Chazy, Bruce and Kevin Bracy of Chateaugay; three sisters; Esther (Jones) Bracy; Beatrice (Colby) Bracy of Lake Placid, Dorothy (Hunkins) Bracy of Old Forge; six grandchildren; 14 great-grandchildren; two great-great grandchildren; his feline companion, Tom. Besides his wife, he was predeceased by his parents; three brothers, Earl, Ross and Harold Bracy; and a grandson, Daniel Bracy. The family wishes to invite all family and friends to celebrate Bob’s life at the Chateaugay American Legion on Saturday, March 7, 2020 beginning at 1 p.m. Spring burial will be held in Eastside Cemetery, Chateaugay. Donations in Bob’s memory may be made to the Chateaugay Fire Department and Hospice of the North Country.

The family of Mr. Robert "Bob" Bracy created this Life Tributes page to make it easy to share your memories.

Send flowers to the Bracy family.