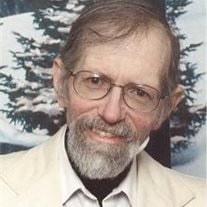 Robert V. Cox, 67, of Alexander Rd., Peru died Tuesday, Oct. 28, 2014 at CVPH Medical Center, Plattsburgh, NY. Born in Brooklyn, NY on Sept. 25, 1947, he was the son of Frederick and Lucia (Del Vecchio) Cox. They predeceased him. He was married to Bonnie Jean Benjamin on April 8, 1972 in St. Bernard's Church, Lyon Mountain by Rev. Howard McCasland. She predeceased him on Nov. 17, 2010. After graduating from high school in 1967, Bob enlisted in the U.S. Air Force and was honorably discharged in 1971. He was employed at Clinton Correctional Facility, Dannemora, retiring in 2006 as senior mail and supply clerk. He was a communicant of St. Bernard's Church and later attended St. Alexander's Church, Morrisonville after moving there. He was a member of the Lyon Mountain Knights of Columbus. Bob loved to cook, share recipes and joke and enjoy his family. He was a devoted husband and loving father. Bob is survived by a daughter and son-in-law, Heather and Shawn Garrow of Peru; a son, David J. Cox of West Chazy; a brother and sister-in-law, Arthur and Joni Cox of West Virginia; three grandchildren, Jareth M. Long, Cole Garrow and Victoria Pecore; several sisters-in-law and brothers-in-law. Calling hours will be held at St. Bernard's Church, Lyon Mountain on Friday, Nov. 7 from 7 to 9 p.m. The Knights of Columbus will meet at 7:30 p.m. for their service. Mass of Christian Burial will be celebrated at 11 a.m. on Saturday, Nov. 8 in St. Bernard's Church with Rev. Ted Crosby officiating. The Lyon Mountain American Legion will provide military honors at the end of mass.

The family of Mr. Robert V. Cox created this Life Tributes page to make it easy to share your memories.

Send flowers to the Cox family.