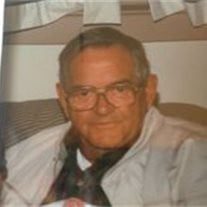 Mr. Robert W. Miles of Chateaugay Lake passed away on Thursday, Oct. 15, 2015 at age 91 at his home surrounded by his wife and loving family. Bob was born in Chateaugay, NY in 1924, the son of the late Frank and Jane Kerr Miles. After graduation from Chateaugay High School he joined the U.S. Army and was trained in the Army's 10th Mountain Division Ski Troop at Cooper Mountain, CO. He ultimately served in WWII in the north of France and in Austria. Bob returned home to marry his childhood sweetheart Betty Boucher on Aug. 28, 1948 in St. Patrick's Church, Chateaugay. He then attended and graduated from Union College in Schenectady, NY and began his career as a teacher. Together, he and Betty taught in various locations in northern New York including Northern Adirondack Central School from 1950 to 1952, ultimately settling in Camden, NY where he taught high school English from 1952 until 1957. He then entered into the guidance dept. and in 1962, he became an administrator, retiring in 1979. Bob was an avid snow and water skier, snowmobiler and golfer. He was a member of the ski patrol and performed for years as an EMT in Camden where he and Betty raised their three daughters. The family returned each summer to Chateaugay Lake where they ultimately built a home. Bob retired at age 55 and thoroughly enjoyed his 36 years of retirement. He was an avid reader and writer. He wrote short stories about growing up in Chateaugay and submitted many articles and photographs to the Chateaugay Historical Society for their publications. He was a member of the Chateaugay Rotary Club and played a key role in the continued restoration of the Chateaugay Town Hall Theater. He was also a communicant of St. Patrick's Church and a former member of the Knights of Columubus, Chateaugay and Lyons Club in Camden, NY. During their retirement years, he and Betty spent many winters in Panama City, FL where he was a member of the Noah's Ark Snowbird Club and recently in Pawleys Island, S.C. where they made many new friends. While in S.C., Bob was a docent at the famed Brookgreen Gardens where he shared his knowledge of history, art and sculpture while imparting lots of humor along the way. His greatest joy was being with his family. Although never boisterous, he was extremely proud of his three daughters and their families. Bob loved to tell jokes, gently kid his friends and family, and sing along with local friends at gatherings. He was especially happy to attend events at the renovated Chateaugay Theater where he would reminisce about watching movies and performances as a child. Bob is survived by his wife of 67 years Betty (Boucher) Miles; their three daughters and spouses: Donna and Mike Owens of Pawleys Island, S.C.; Laurie and Jason LaManna of Sanibel Island, FL; and Karen and Rod Littler of Fayetteville, NY; their grandchildren Ryan (Amy), Tammy, JoJo(Ashley), Ben, Callie and Casey; their step-grandchildren Caroline (Tim) and Dominique (Jerry); their great-grandson Henry and soon-to-arrive twin great-granddaughters. Bob was predeceased by his parents; a sister, Mary Audette; and a brother Francis Miles. The family wishes to thank the staff of CVPH of Plattsburgh and Hospice of the North Country for their loving care of Bob in his final weeks. Contributions may be made to: Hospice of the North Country – 3909 State Route 11, Malone, NY; The Chateaugay Historical Society, Chateaugay, NY or The Salvation Army. Calling hours will be held at the Chateaugay Funeral Home on Monday, Oct. 19 from 4 to 7 p.m. A Mass of Christian Burial will be celebrated at 11 a.m. on Tuesday, Oct. 20 at St. Patrick's Church, Chateaugay. Burial will take place at St. Patrick's Cemetery.

Mr. Robert W. Miles of Chateaugay Lake passed away on Thursday, Oct. 15, 2015 at age 91 at his home surrounded by his wife and loving family. Bob was born in Chateaugay, NY in 1924, the son of the late Frank and Jane Kerr Miles. After graduation... View Obituary & Service Information

The family of Mr. Robert W. Miles created this Life Tributes page to make it easy to share your memories.

Send flowers to the Miles family.