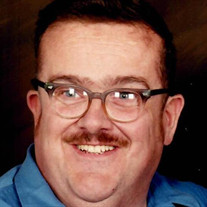 Roger Norman Gilmore, 63, of the Alice Center Nursing Home died peacefully in his sleep on September 3, 2017. Born on September 13, 1953, he was the son of Norman and Mary Shutts Gilmore of Merrill, New York. He lived most of his life at home under the care of his loving family until an accident in 2009 caused him to live the rest of his life in the Franklin County Nursing Home and later the Alice Center, where he received excellent care. He attended Ellenburg Central School and The Champlain Valley Educational Center. In his early days Roger spent his time sitting on his rock at home with his dog Sparky pow pow by his side watching all the cars going by and hollering to all the drivers from the community that loved him like family. Before his accident, Roger enjoyed traveling around the North Country with his respite aides, going dancing with his friends, bowling, swimming and going to the petting zoo or walking the mall. He came home every weekend to enjoy a home cooked meal with his mom or his brothers Bruce and Paul who were his caregivers. He also enjoyed going out once a week with his sister Cindy to have lunch or a picnic. Roger was predeceased by his parents and a brother-in-law Larry Garrow. He is survived by his brothers, Bruce and Diane Shutts and Paul and Amanda Gilmore of Merrill; sisters, Cecilia Garrow of Plattsburgh, Mary Rita Gilmore of West Chazy, Linda and Alfred Kalvaites of West Chazy, Cynthia Gilmore of Dannamora and Brenda and Matthew Brown of Merrill; as well as many niece and nephews and great nieces and nephews. Roger will forever be in our hearts. Calling hours will be held at Chateaugay Funeral Home on Wednesday, September 6 from 4 p.m. to 6 p.m. A prayer service will immediately follow at 6 p.m. in the funeral home chapel with Deacon Brian Dwyer officiating. Entombment will follow at Whispering Maples Memorial Garden, Ellenburg Depot. Donations can be made to Clinton County SPCA or the Alice Center. Online condolences may be offered at www.chateaugayfuneralhome.com

Roger Norman Gilmore, 63, of the Alice Center Nursing Home died peacefully in his sleep on September 3, 2017. Born on September 13, 1953, he was the son of Norman and Mary Shutts Gilmore of Merrill, New York. He lived most of his life at home... View Obituary & Service Information

The family of Mr. Roger Norman Gilmore created this Life Tributes page to make it easy to share your memories.

Send flowers to the Gilmore family.