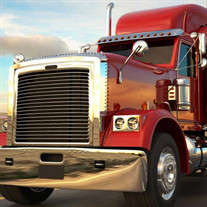 Roger O’Dell Jr., 62, of Chateaugay, died Tuesday, November 5, 2019 at his home with his family by his side. Born on May 8, 1957 in Mahopac, NY, he was the son of Roger Sr. and Helen (Ostrander) O’Dell. Roger was married to Kimberly Porter on August 2, 2003 in Burke. He was employed by Boston Hides and Furs in Chelsea, MA as a tractor-trailer driver. He was motorcycle and car enthusiast and could be found tinkering with his hot rods and polishing his tractor-trailer. Roger is survived by his wife of 16 years; five children, Roger O’Dell III and his wife, Lori of Chateaugay, June O’Dell and her companion, Luke Ackerberg of Virginia, Dawn Pierce and her husband, Richard of Salem, NY, Clifford O’Dell and his wife, Jamie of Chateaugay, Brian Healey and his fiancée, Diana Contreras of Old Hickory, TN; four grandchildren, Makaya, Mackenzie, Richard and Alexander; a brother, John O’Dell of the Philippines; a sister-in-law, Mary Ann O’Dell; two nieces, Nina Williams and Helena Marin; a nephew, John O’Dell; Roger will be greatly missed by his loving companions, Allie, Gomer and Hector. He was predeceased by his parents and a brother, Jim O’Dell. Services will be private and at the convenience of the family.

The family of Mr. Roger O'Dell Jr created this Life Tributes page to make it easy to share your memories.

Send flowers to the O'Dell family.