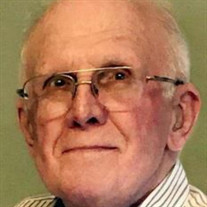 Roger Joseph Tremblay of Constable, NY., died peacefully at home on March 27, 2020 at the age of 93. Born November 15, 1926 to the late Dozilva and Lottie (Jock) Tremblay, he grew up in Bombay, NY. The eldest of 9 children, the following predeceased him: his twin sister Rhoda Trumble of Brushton, Blanche Martin of Syracuse, and Lyle of Westville; and survived by: Hector of Westville, Jay of Ft. Covington, Julius and Junior of Bombay, and Annie Chatland of Brushton. Roger is survived by his wife, Betty of 70 years; his sons David (wife, Tomi McNamara) of Warwick, RI and Mark of Maitland, FL; his daughters both of Arvada, CO - Spring and Cindy (husband, Joe Robles), Diane Wright (husband, John) of Syracuse, NY; grandchildren Nichole Michel (husband, Tim), Clay Wright, Bronson Tremblay (deceased); step-grandchildren Michael Lombardo and Gregg Lombardo (wife, Molly); and two great grandchildren Hannah and Emmaline Lombardo. He worked for L.C. Smith & Corona Typewriter and Nelston Shoe of Syracuse, Warner Brothers Garment Factory of Malone, Eisenhower Locks, and then for Reynolds Aluminum Plant of Massena for 30 years, retiring in 1989. He was an active member of the Constable Volunteer Fire Department for 65 plus years and a member of the Fish and Game Club. He helped establish the Constable Adult Center and was Tax Collector for town of Constable for several terms. Roger’s favorite pastimes in his younger days were hunting, repairing small machines, and snowmobiling. Years later he loved cutting down trees, playing cards, working in the yard and traveling to visit family. Due to the current health crisis, funeral services will be held at a later date. In his honor, donations may be made to the Constable Fire Department: 1136 State Route 122, Constable, NY 12926.

Roger Joseph Tremblay of Constable, NY., died peacefully at home on March 27, 2020 at the age of 93. Born November 15, 1926 to the late Dozilva and Lottie (Jock) Tremblay, he grew up in Bombay, NY. The eldest of 9 children, the following predeceased... View Obituary & Service Information

The family of Mr. Roger Joseph Tremblay created this Life Tributes page to make it easy to share your memories.

Send flowers to the Tremblay family.