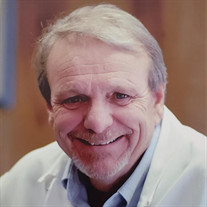 With great sadness the family of Ronald Warne Davis, 73, announces his death on Tuesday, May 26 at Lee Memorial Hospital in Cape Coral Florida of a brain hemorrhage. Born on August 4, 1946 in Adams Center, NY, he was the son of Lionel and Alice McCadam Davis. At age 5, he moved to Chateaugay with his family and graduated from Chateaugay Central School in 1966 where he met his future wife, Constance Peacock. Upon graduation, he began his career at McCadam cheese company as Co-manager of MACO, a division of McCadam that manufactured cottage cheese. He moved on from there to become production manager and then plant manager at McCadam. In 1978, Ron accepted positions at Dairylea and Great Lakes Cheese in Adams NY. In 1987, he moved on as manager of a Kraft Plant in Cohocton, NY. Always being an entrepreneur, he and his wife Connie, bought an Amish cheese company in Norfolk, NY (Plumbrook Amish Farms) which he and his wife operated for several years. Coming full circle, Ron returned to McCadam in 1995 as plant manager, retiring in 2012 at which point he and his wife moved to Cape Coral, Fl. Ronald loved going camping, spending time at the beach with Connie, sitting by the pool and watching his grandsons swim, traveling, golf and history. Ronald’s accolades include winning world’s best cheese in 2008. Ron was an active member of New York State Cheese Manufacturers Association, President of Chateaugay Revitalization Committee and active in many community projects. Ron is survived by his wife of 52 years, Constance (Connie) Peacock; his daughter, Elizabeth and son-in-law, Aaron Firman of Auburn WA and grandchildren, Matthew and Miles also of Auburn WA; his daughter in-law, Lori Davis of Potsdam NY and step-grandchildren, Brandon Butcha, and Ashley and Joe Hargrave of Potsdam, NY. Ron is also survived by his sister, Charlotte (Sally) and Bill Gray of Belaire, MD. He also leaves behind sisters-in-law and brothers-in-law, Sally and Walter Farrell of Merrill, NY; Judy and Michael Curtain of Queensbury, NY; brothers-in-law and sisters in-law; Gary and Barbara Peacock of Plattsburgh, NY and Robert Peacock and Pam Poindexter of Andover, MA as well as step-father-in-law Ken Cheyne of Chateaugay NY. He is also survived by many beloved nieces and nephews; Jessica and Patrick Tryon, Christopher Farrell, Graham Curtain, Mary Curtin, Madora Curtin, Valerie Peacock and RJ Puntoni, Ben Peacock, Steve and Sue Gray, Dan and Florencia Gray, Mark and Kara Gray. Ron was predeceased by his son, Matthew Davis; his parents, Lionel and Alice Davis; his brother and sister in-law, Lionel (Jr.) and Susan Davis; his father-in-law, Richard Peacock; mother-in-law, Madora Peacock Cheyne; nieces, Janene Adelstein, Tammy Davis Heller, and nephew, Todd Davis. A memorial service for Ronald will be scheduled in Chateaugay at later date. In lieu of flowers, donations in Ron’s memory can be made to: Chateaugay Library, Chateaugay Fire Department, or Chateaugay Revitalization Committee.

With great sadness the family of Ronald Warne Davis, 73, announces his death on Tuesday, May 26 at Lee Memorial Hospital in Cape Coral Florida of a brain hemorrhage. Born on August 4, 1946 in Adams Center, NY, he was the son of Lionel and Alice... View Obituary & Service Information

The family of Mr. Ronald Warne Davis created this Life Tributes page to make it easy to share your memories.

With great sadness the family of Ronald Warne Davis, 73, announces...

Send flowers to the Davis family.